This Pilot's Death Defying Photoshop Skills Are Shocking the Internet

This Brazilian pilot is in big trouble for taking selfies thousands of feet up, even though the photos are fake.

Pilotganso is a well-known Instagrammer with 72K followers; he’s gained a rabid following thanks to the incredible selfies on his page showing the aviator hanging out the cockpit of a Boeing 737 thousands of feet above the earth.

His shots have many scratching their heads as to whether they are in fact real.

No, they’re not. The Instagrammer, real name Daniel Centeno achieves these aerial shots using the magic of Photoshop, a fact he often mentions in the captions. So, how does he do it? He takes a picture of himself outside the cockpit while on land then super imposes the shot onto a background of a stunning landscape or fluffy clouds. He’s also seen grinning over shots of Dubai, New York, and Rio de Janeiro.

It’s pretty obvious that these shots are fake and the pilot isn’t hiding his penchant for photo manipulation.

Daniel even says so in the captions: “I have to let you know that this photo is fake guys, just in case,” and “Photoshop mode ON.”

Notably, his hair isn’t blowing in the wind, which would be quite gusty so far up. The plane is also going way too fast to even take a photo and probably the most telling of all is the reflection of the airport tarmac in his sunglasses.

Despite this glaring evidence, many online seem to be still perplexed about the legitimacy of these photos, claiming that the pilot is putting the lives of his passengers at risk.

If Centeno were to open the plane window for the picture, the drop in cabin pressure would result in hypoxia, decompression and altitude sickness to the crew and passengers. It could also cause the aircraft to drop 10,000 feet causing oxygen masks to drop and all hell to break loose.

However, one Facebook commenter, Jay Barber had some stern words for the fly boy believing the pictures to be real.

"This is disgraceful I can't believe anybody would use a selfie stick whilst driving a plane let alone leaning out of the window and to put all the passengers' lives at risk. If he was in a car he would have the book thrown at him so he shouşd be sent to prison for many many years for attempted Manslaughter"

Another commenter, Panos Agiannitis even shared an actual picture of him taking a selfie from a glider.

"This a true one, made in Greece in tatoi airport on a glider. At about 4000 feet, 70 miles/h. Took over a minute to stable the stick and not loose the camera. Really difficult even on that small speeds. Impossible on airline aircraft!!!"

Pilotganso is not doing anything against protocol since he takes the pictures while still on land. Most airlines reprimand pilots for taking selfies while flying, believing they should remain vigilant at all times while the plane is in operation. 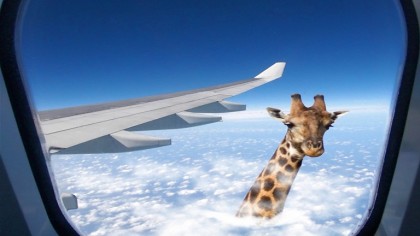 Why are all aircraft windows round?

In the United States, the sterile cockpit rule requires pilots to refrain from non-essential activities during critical stages of flight, including while the aircraft is involved in taxi, takeoff, and landing. The EU follows similar regulations, prohibiting pilots from using portable electronic devices.

A Japan Airlines pilot was suspended in 2015 for bringing a stewardess into the cockpit and taking a selfie with her after the plane has already climbed to 10,000 feet. The plane was en route to Osaka from northern Japan.

While Centeno’s gimmicks are pretty harmless, he should probably still take heed of sky laws and leave the stunning aerial shots to the professionals.

YouTuber examines gömböc: a shape defying the laws of physics

Web 3.0: the next stage of evolution for the internet