Take your love for the golden era of gaming and bring it to life with the Gamebuino META. This device allows you to create retro games by yourself.

Ah yes, the golden age of gaming, a period both relished and nostalgically craved by game fanatics. This time period debated among buffs. Yet, most agree the golden age began around the late 70's and gained steam throughout the 80's, around the introduction of vector display technology.

Referenced most recently in Season 2 of Stranger Things, some games that you may have lost hours of your life too include Donkey Kong, Centipede, Pole Position, QBert, Space Invaders, or even Dragon's Lair. These games laid the framework for both modern games now and your childhood. As you ventured from level to level, did you dream of creating your own game? Gamebuino aims to bring that childhood fantasy to life.

Create and Play with Gamebuino

Out of that retro gaming nostalgia, Aurelien Rodot created the Gamebuino, a handheld device reminiscent of the Gameboy Advanced, that allows you to create and play your favorite classic games. The first iteration, the Gamebuino Classic, was a pocket-sized gaming device that allowed you to play "all the games you want for free." The games you play or create are part of a broader open source community. The skeletal hardware makes it very simple for you to create a game.

For those who think programming a game may be out of reach, the Gamebuino team hopes to make that aspiration super attainable and exciting. 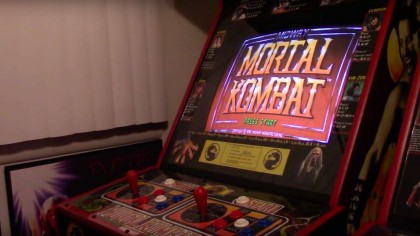 "That is why we strive to make programming initiation a fun and easy experience. The Gamebuino META is the first step. With your help, it will not be the last," says the team.

This new Gamebuino META design is optimized for players who want to play all day without a hitch. "We wanted this console to be unique, not only by its design but also by its features. The new backlights and color screen push the game experience beyond the screen edge. These eight individually controllable RGB LEDs project flashes, explosions and any special effects you want right into your hands," states the team.

If you like what you see and hear, you should go and support the Gamebuino team's Kickstarter campaign.