This Pokéball-Like Device Handles Delicate Sea Creatures Without Harming Them

This Pokéball-style origami robot can safely capture jellyfish, octopuses, and other delicate sea creatures with ease.

Researchers now have a new way of treating the ocean's most delicate, soft-bodied creatures with the care they need.

A team from Harvard University's Wyss Institute, John A. Paulson School of Engineering and Applied Sciences (SEAS), and Radcliffe Institute for Advanced Study made an origami-inspired enclosure to safely transport creatures like jellyfish, squid, and octopuses.

“We approach these animals as if they are works of art: Would we cut pieces out of the ‘Mona Lisa’ to study it? No — we’d use the most innovative tools available. These deep-sea organisms, some being thousands of years old, deserve to be treated with a similar gentleness when we’re interacting with them,” said collaborating author David Gruber, who is a 2017‒2018 Radcliffe Fellow, National Geographic Explorer, and professor of biology and environmental science at Baruch College, CUNY.

Currently, most marine teams have a handful of ways to collect soft-bodied marine life -- and none of them are extremely beneficial to the creature. One way is through a detritus sampler, a tube-like device that uses "doors" on either end to quickly trap the creature.

As the Harvard team points out, detritus samplers require a bit of skill on the end of the user or they run the risk of harming the creature. The second most common type of creature-capturing device is a bit like a giant suction cup with a storage bucket. However, that common technique is one of the most detrimental to soft-bodied creatures.

The Harvard team found both capture techniques unacceptable. The study's first author Zhi Ern Teoh started the project after being inspired by a class taught by Wynn professor Chuck Hoberman. Initially, Teoh wanted to apply his work with microbots and folding robots into a new way. A fellow researcher saw Teoh's design and suggested it could be a novel way to capture sea creatures rather than the rougher alternatives.

Teoh's device has five 3-D printed polymer petals that open up via rotating joints attached on a scaffolding. Whenever a single motor applies torque to where the petals meet, the researchers explained, the device opens like a hollow dodecahedron -- hence it's named Rotary Actuated Dodecahedron (RAD).

“The RAD sampler design is perfect for the difficult environment of the deep ocean because its controls are very simple, so there are fewer elements that can break. It’s also modular, so if something does break, we can simply replace that part and send the sampler back down into the water,” said Teoh. “This folding could also be well-suited to be used in space, which is similar to the deep ocean in that it’s a low-gravity, inhospitable environment that makes operating any device challenging.” 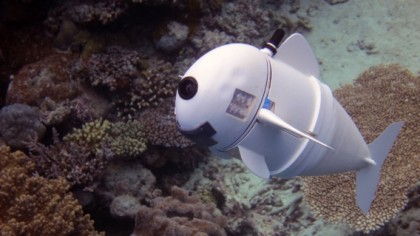 After extensive research and development, the team put the RAD to the test at Mystic Aquarium in Mystic, Connecticut. Using the device, they successfully caught and released moon jellyfish. After the success in Connecticut, they tested the device in the ocean using a remotely operated vehicle from Monterey Bay Aquarium in Monterey, California.

“Our group’s collaboration with the marine biology community has opened the door for the fields of soft robotics and origami-inspired engineering to apply those technologies to solve problems in an entirely different discipline, and we are excited to see the ways in which this synergy creates novel solutions,” said Wood, who is a founding core faculty member of the Wyss Institute, the Charles River Professor of Engineering and Applied Sciences at SEAS, and also a National Geographic Explorer.

The team wants to add cameras to the RAD sampling device to have a better view of capturing an animal and collecting data on it.