This insane gadget looks like a prop from Transformers. It's actually a very clever device that plays a 3D animation onto spinning LED blades.

Holograms are a symbol of what our future might look like, having been glorified by films like Iron Man and the Star Trek franchise. Our technology hasn’t quite caught up with our obsession with the 3D imagery just yet. However, there are some mighty fine ‘almost holograms’ out there.

In a recent Instagram video, an Australian company showed off a new toy they picked up on a recent trip to China. The little gadget looks like it makes floating holograms out of thin air. What actually is happening is an animation being played on strips of led covered blades that work as a display when the whole thing is spinning like a fan. Yes, it sounds a little crazy. But there is no denying the effect is super compelling.

The boys brought back some cool toys from their last China trip! This is one strip of LEDs working like a fan. Keep watching towards the end for the full 3D graphics

Watch closely and you'll see rotating black lines slicing through the animation. That’s because the camera shutter and the spinning blades aren’t quite in synch. But if it looks this good through a camera, we can only imagine how mind-blowing the device is in real life. The company that found the gadget, specialize in giant digital signage so they had some professional interest in the product. We're just imagining how we can turn our office into Tony Stark's den.

The Very Real History of Holograms

Holography was first developed in the 1940s by the Hungarian-British physicist Dennis Gabor.  Gabor went on to win the 1971 Nobel Prize in physics for his invention.  True holograms are made using a single laser that is split in two by a special lens. Because a laser is ‘coherent’ light, each of this split beams is exactly the same. One is known as a reference beam and is shone straight to the projection surface and the second beam is reflected off of the object that you want to make a hologram of. The two beams intersect and interfere with each other. The interference pattern is what is imprinted on the recording medium to recreate a virtual image for our eyes to see. While there are lots of technologies, like the spinning fan that seem to be holograms, most are actually just very sophisticated projections.  This being said there have been some very exciting steps into true hologram technology lately.

A paper published in Nature Photonics by a team of Korean Scientists outlines how they have developed "an alternative method to generate dynamic 3D images by controlling volume speckle fields significantly enhancing image definition." They claim the resulting 3D images are 2,600 times better than existing technologies. Similar research has been done in Australia. 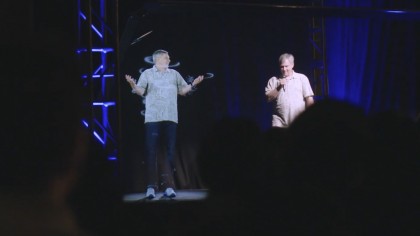 The journal articles abstract reads, "We demonstrate transparent meta holograms based on silicon metasurfaces that allow high-resolution grayscale images to be encoded. The holograms feature the highest diffraction and transmission efficiencies, and operate over a broad spectral range." So while there is energy being spent on developing hologram technology, it doesn’t seem like it will be in our living rooms any time this decade. But in the meantime, we can entertain ourselves with cool Chinese gadgets.