This Robot Can Read and Interpret Human Facial Expressions

Cambridge University scientists have developed Charles, a robot that can read and interpret human emotions via facial expressions.

We have become accustomed to—no doubt some more than others—seeing or hearing about android or humanoid robots that can mimic human behavior, human movements, and in some cases, even, human thinking. 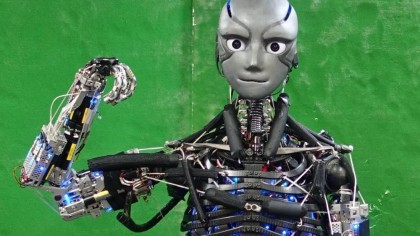 A team of researchers from Cambridge University’s Department of Computer Science and Technology, however, have created a robot that can copy human emotions, which may mean in fact that we’ve crossed into the final frontier of artificial intelligence (AI) research and development (R&D).

Named Charles, the robot can scan and interpret various expressions written on a person’s face (which probably means more expressive people will offer Charles more to work with, as opposed to a person with a good poker face).

The process, which only takes a few seconds, starts with a camera capturing images of a person’s face, after which the data is transmitted to a computer for analysis of the various facial nuances. Charles then—via several servos—is able to closely match the subject’s facial muscles.

Charles, who looks more like a friendly creation from a Hollywood special effects studio than a humanoid robot, has a large, expressive face and eyes. This is thanks to the high-quality prosthetics that went into his design.

Take a look at an explanation below of the work that went into making Charles:

“We've been interested in seeing if we can give computers the ability to understand social signals, to understand facial expressions, tone of voice, body posture and gesture,” adding, “We thought it would also be interesting to see if the computer system, the machine, could actually exhibit those same characteristics, and see if people engage with it more because it is showing the sort of responses in its facial expressions that a person would show. So we had Charles made.”

The deeper reason behind the project, according to Professor Robinson, is to use Charles as a tool for analyzing the perceptions of robotics and robots by the general public:

“The more interesting question that this work has promoted is the social and theological understanding of robots that people have. Why do, when we talk of robots, always think about things that look like humans, rather than abstract machines, and why are they usually malicious?”

At present, Charles can project a stunning array of emotions, including shock, fear and anger, even capturing some as subtle and complex as arrogance, or even grumpiness, though ironically detecting these intended emotions without any prompts or indications could prove a challenge. What this also indicates, in terms of the future of emotional robot R&D is that larger task of creating a platform for understanding that even scratches the surface of the human heart—in other words, establishing empathy between human and robots—will decide the future course of these robots.

For now, however, we can content ourselves with the knowledge of Charles's vast capabilities and potential.

This Robot Lawnmower Can Be Controlled Through VR