This Robot Is Designed to Fall Rather Than Walk

Perhaps robots should be designed to fall and get back up again rather than mimic human walking flawlessly. A team at the University of Tokyo have been working on just that.

Should robots be designed to fall rather than walk? Walking comes second nature to us though it takes a little time to perfect. For robots, however, this seemingly simple task is far from that. Though progress has been made in quadrupedal robots that show very encouraging results, the world of bipedal robots is far behind with some notable progress. 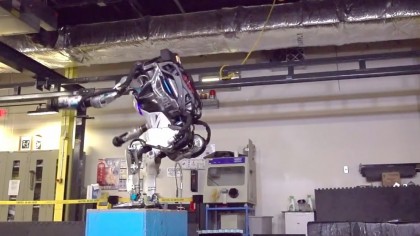 Of course, we are all used to self-righting robots thanks to Robot Wars, but this robot takes that to a whole new level.

Even the smallest incremental improvement is hailed as a triumph as we have learned that for non-organic walking things not falling over is actually pretty hard. This is incredibly important if we 'must' have walking robots that will be useful in the future.

But the real world is a very different place to the lab floor. An incredible variety of terrain and hazards need to be overcome for any walking robot to be designed to fall.

With that in mind companies like Boston Dynamics are working hard on robots that able to stay upright and stabilize after being kicked, for instance.

But a team from Tokyo have decided to take this idea one step further. Rather than tweak the robot's ability to stand they decided to think outside of the box. Instead of worrying about falling they decided to design a robot that can fall down and get right back up again.

Kei Okada and Masayuki Inaba from The University of Tokyo and Kawasaki Heavy Industries decided to accept that robots are by nature clumsy and do something about it. To that end, they have developed the Robust Humanoid Robot or RHP2 for short. This robot is specifically designed to survive a fall and gets right back on its feet.

This 'new' concept for walking robots was recently reported on by IEEE Spectrum. regarding the team's paper submitted to the International Conference on Intelligent Robots and Systems in Vancouver. This year's theme being "Friendly People, Friendly Robots".

Robots and humans can work together

"We work together in factories, hospitals, and households, and share the road. This collaborative partnership of humans and robots gives rise to new technological challenges and significant research opportunities in developing friendly robots that can work effectively with, for, and around people."

The Japanese team developed the human-sized bipedal robot for prolonged work in potentially hazardous areas. This could include industrial factories or disaster sites. They have even developed different suits it can wear that are more suited to each environment it may find itself. These include a Hazmat suit for chemical spills or flame-retardant protection for infernos.

The robot is also tethered so they don't need to worry about power or connectivity. As the robot will, hopefully, be able to get right back up again there is no need to send humans out to rescue it and lose valuable time repairing it.

Despite RHP2 specifically being designed for helping out humans and potentially saving lives it could have an accidental side effect. This robot's ability might also open up the possibility of 'sparring' robots or, indeed, 'punchbag' robots. Could this be another step towards a real-life Westworld where robots are specifically designed to be beaten up by human combatants? Perhaps it could lead to new areas of robotic combat?

With recent incidents, the likes of a harmless hitchhiking robot being decapitated, could these new robust robots be used to vent our primeval instincts for violence? Only time will tell, but as AI develops we could see a time when 'robotic rights' might be deemed necessary to prevent 'cruelty to robots'.

The robot comes with a 'fall protection system' that is designed to provide three critical things.

-prevent indirect mechanical damage such as damaged joints and motors that might occur when falling,

-and prevent all fragile and expensive bits, like sensors and computers being damaged during a fall.

Most of this is to be prevented by the robot's armored metal frame. The entire robot is encased in this armor meaning there are very few, if any, chinks in it where environmental contact could cause damage.

The most important part of RHP2's being designed to fall is that it has been built from the ground up. It has an armored metal frame with other reinforcement to vulnerable body parts. These include parts that are likely to be damaged when falling like the knees, elbows, elbows and other joints.

The robot has also been designed to detect errors, attempt to find a recovery solution and correct itself accordingly. Though still in the early stages of development, its creators hope to replace its electrical motors muscles with hydraulic replacements. The idea is to provide the robot with more power and remove power cord tether issues.

The robot also dispenses with sing conventional geared joint mechanisms. Rather RHP2 uses linear actuators wherever possible. These are much more robust than their geared alternatives. Clearly an important feature of a robot designed to fall.

RHP2 also runs on ROS with some autonomous behavior. These include the ability to move its limbs during a fall and get back on its feet once down. To date, however, the team have been unable to emphasize practical, operational autonomy.

Since the current form of the robot relies on a tether it’s possible that realistic use-cases may involve telepresence or DRC-style assistive telepresence.

We may never be able to mimic our innate ability to walk upright in robots. But it is still early days. Despite this, robots that can walk, not 'fear' falling over and get right back up again could be a worthy compromise.

Of course, this is far less elegant than a nonfailing robot but we are a long way from the latter. Disaster relief would benefit immensely from a capable humanoid robot. With that in mind, at least in the short term, perhaps robots designed to fall rather than walk would be very useful.