By  Donovan Alexander
Dec 05, 2017
University of Utah via PressFrom

Advancements in technology are beginning to mimic and surpass the imaginative technology from pop culture’s most celebrated science fiction moments. The latest sci-fi advancements in prosthetics are reminiscent of Star Wars or even Fullmetal Alchemist. The human brain can now control modern prosthetics. Even more so, "neuroprosthetics" will allow amputees to touch and feel again. The U.S. funded program Haptix, in collaboration with DEKA, and the University of Utah, aims to develop neuroprosthetics “that would help amputees feel and move intuitively.”

14 years ago, Keven Walgamott lost his arm in a horrific electrical accident. Last year, he decided to take part in an experimental program at the University of Utah’s neuroprosthetic program.

This program aims to give amputees like Kevin the opportunity to touch and feel again through an advanced, DEKA designed, prosthetic arm, controlled by the user's nerves and brain. Dubbed, "LUKE," after the all-powerful Jedi, Luke Skywalker, the program’s prosthetic arm has allowed Keven to feel, touch and clasp some simple, everyday objects.

Last Tuesday, at the Society for Neuroscience conference in Washington, the Utah team presented their promising results from their experimental tests, showcasing how rapidly neuroprosthetics has advanced in just over the last four years. “By adding sensory feedback, it becomes a closed-loop system that mimics biology,” said Jacob George, a bioengineering Ph.D. student at the University of Utah and lead author of the study.

Also referred to as brain-computer interfaces, neuroprosthetics is technological devices that allow individuals to gain or regain control of their senses and movements by creating a connection between their brain and a computer. Simplified, neuroprosthetics, will enable people to touch using the power of thought alone. 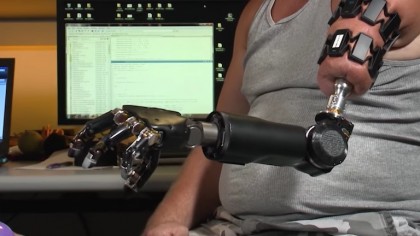 Each year hundreds of thousands of people across the globe lose control of their limbs because of an injury to their spinal cord. Neuroprosthetics can potentially restore a patient's sense of hearing, sight, and overall movement.

Within weeks of signing up for the experimental program, Walgamott had electrodes implanted into what remained of his left arm, and he was hooked up to the Utah researchers’ sensory computer program. The computer program allowed him to feel the textures of a wall. Taking the experiment a step further, researchers then equipped the "LUKE" robotic arm to Keven. After almost 14 years of not feeling anything, Walgamott was able to not only manipulate objects but feel the sensation of touching them. “When I went to grab something, I could feel myself grabbing it. When I thought about moving this or that finger, it would move almost right away,” he said. “I don’t know how to describe it except that it was like I had a hand again.” The researchers were able to take the many dimensions of touch, pressure, vibration, temperature, and pain and translate that into a sensory experience.

This technology is astounding news for amputees across the globe. Researchers want to continue to challenge and push the technology forward. The goal is to get the prosthetic technology to where people don't even have to think through every action or movement. As for Keven, this opportunity has made mundane tasks he has struggled with far more natural and rewarding.