A new study introduces and proves the efficiency and desirability of a robotic system in rehabilitating patients.

By  Loukia Papadopoulos
May 07, 2018
Ben-Gurion University/YouTube

A new study from the Ben-Gurion University of the Negev (BGU) in Beer-Sheva, Israel, published in Restorative Neurology and Neuroscience, illustrates for the first time a robotic system that can help patients with rehabilitation. The system, that plays Tic Tac Toe with patients, was successful in improving real-life task performance.

“Effective human-robot interactions in rehabilitation necessitates an understanding of how these should be tailored to the needs of the human. We report on a robotic system developed as a partner on a 3-D everyday task, using a gamified approach,” stated the study.

The research group sought to design a game that would stimulate movements that people undertake regularly and that are often the focus of rehabilitation. "Playing Tic Tac Toe with a set of cups (instead of X's and O's) is one example of a game that can help rehabilitate an upper limb," said Dr. Shelly Levy-Tzedek of BGU's Department of Physical Therapy, and Zlotowski Center for Neuroscience.

"Playing Tic Tac Toe with a set of cups (instead of X's and O's) is one example of a game that can help rehabilitate an upper limb."

"A person can pick up and place many cups while enjoying a game and improving their performance of a daily task," Levy-Tzedek added. His team tested their system on 62 adults aged 25 years old to 75 years old both male and female.

The researchers examined the study’s participants' desire to play with a robot compared to a set of computer-controlled LED lights. The aim was to investigate patient’s preference for interacting with an actual physical robot.

They separated the test subjects into a young group (25-year-olds) and an older group (75-year-olds). They found that both groups preferred the robotic system over the LED lights system, selecting the robot when asked to play two more games.

Older adults found the robot more human and young adults found it "more interesting, fun and appealing." However, one interesting variation did occur when test subjects were asked to play 10 more games.

Too slow for more

Older adults still chose the robot but younger ones switched to the LED system. "Some of the young adults complained that the robot moved too slowly; therefore, they preferred the quicker system when asked to play many more games," said Dr. Levy-Tzedek. 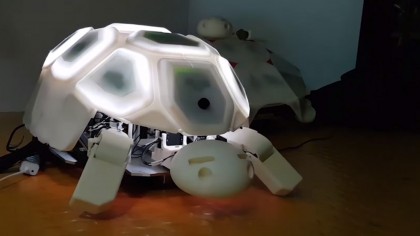 "That indicates a need to personalize the speed of the robot to each participant," Levy-Tzedek added. Overall the study proved successful in its rehabilitation goals.

“We demonstrated the feasibility of the system to encourage the performance of repetitive 3D functional movements, and track these movements. Young and old participants preferred to interact with the robot, compared with the non-embodied system,” concluded the study.

Interestingly enough, the study also found that test subjects mimicked the rate of the robot playing with them. Both groups tended to move at the speed of the system they interacted with.

Via: Restorative Neurology and Neuroscience, Ben-Gurion University of the Negev