This Secret US Government Airline is Shrouded in Mystery

Janet is the private airline run by the U.S. government to take employees from Las Vegas to top secret government facilities including Area 51.

Janet is a super secret airline run by the United States Government. The only thing we really know about Janet is that we don’t know much at all. Even the name of the airline is contentious, while some claim it to be the acronym for Joint Air Network for Employee Transportation. Others say it is a nickname given by plane watchers who discovered that ‘Janet’ was the call sign being used by the airline's pilots when they were in civilian airspace. What we do know is that there is a fleet of white Boeing 737-600 airliners operating out of the Gold Coast Terminal at the Las Vegas Airport, these planes are devoid of any markings except a registration number and a single red stripe running along the side of the plane. If all of this isn’t mysterious enough, the planes' destinations add another layer to this intriguing story.

Each day these planes go back and forth between some of the most protected airspace in the United States. Many of these flights take off and head north from the airport, and then at a certain point turn off their transponders that allow the plane's position to be tracked. At this location, the pilot also requests a frequency change from Nellis Control that supervises the airspace in southern Nevada. Once the frequency is approved, the Janet planes then head towards the restricted airspace otherwise known as Area 51.

This notorious area of the Nevada desert is a United States Air Force Testing facility famous for its secrecy and close connection to alien aircraft sightings. The official names of the facility are Homey Airport and Groom Lake. Area 51 was a nickname given to the space during the Vietnam war. The restricted airspace around the site is officially called Restricted Area 4808 North (R-4808N). The Janet flights heading to the area are likely carrying government employees who work in the Vegas area.

Despite the CIA publicly acknowledged the existence of the base for the first time in 2013 and declassified many documents associated with the base's research activities, much of what goes on there is still classified as Top Secret/Sensitive Compartmented Information. It has been the site for advanced aircraft research, development, testing, and evaluation since the 1950’s and was the original test location for the U-2 high altitude spy plane in 1955.

The creation of this high-altitude plane leads to a huge increase in the number of reported UFO sightings. 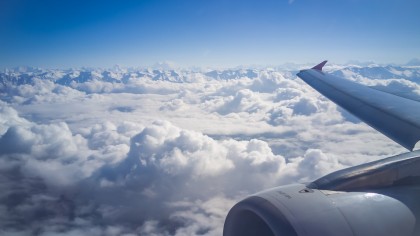 The unusually shaped aircraft was often reported to be seen in the early evening when the sun was reflected off its wings, giving it a fiery appearance, unlike any other known aircraft at the time. As well as heading to Area 51, Janet flights leaving from the Las Vegas airstrip can be tracked to the Tonopah test area, China Lake, the naval weapons testing and cache area as well as the Edwards Air Force Base. While all the Janet planes are owned by the U.S. Air Force, their daily operations are managed by a division of the AECOM corporation. Understanding how AECOM came to operate these flights is convoluted, AECOM is a publicly trading company that provides technical and management support.