Nissan Europe has been developing a car paint that repels both water and oil based dirt. Nissan also claims that the paint can prevent snow, ice and frost build up.

The paint was developed at the Nissan Technical Center in the UK in conjunction with Nanotechnology firm, Nano labs, in the hope that Nissan owners would never have to wash their cars again. Since then they’ve coated both their Nissan Note and EV Nissan Leaf with the paint, though it's not ready for mass production just yet.

“While there are currently no plans for the technology to be applied to Nissan vehicles as standard equipment, Nissan will continue to consider the coating technology as a future aftermarket option,” Nissan said in a press release in 2016.

The paint has been formulated to be both oil and water resistant, creating a layer of air between the coating and a splash of dirty liquid. The air prevents the grime from attaching itself to the car surface. Instead, it slips off the car seamlessly.

What’s interesting about this process is that it happens on a level that can’t be seen, these nano-particles minimize the surface area where filth tends to cling. Nissan also claims that the paint can prevent snow, ice and frost build up. It’s a cheaper alternative to other coatings that use surface tension. 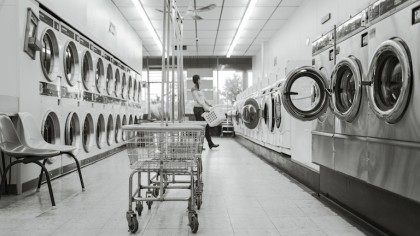 “Ultra-Ever Dry uses proprietary omniphobic technology to coat an object and create a surface chemistry and texture with patterns of geometric shapes that have “peaks” or “high points.”  These high points repel water, some oils, wet concrete, and other liquids unlike any other coating,” states the description on the company website.

This is the first time such technology has been used on a car but its quite common in other products out there such as sunscreen and even clothing that repels pollution. Nano labs paint is based on coatings that are sold for commercial uses, such as paint for buildings to prevent graffiti.

This isn’t the first time Nissan has used next level paint to coat their cars. The manufacturer came out with “scratch shield” or self-healing paint in 2005. The transparent coating uses chitosan, derived from chitin –a component found in the shells of crustaceans such as lobster, crabs, and shrimp. Chitosan is then chemically incorporated into the traditional polymer materials found in the lacquer that traditionally protects car paint.

The paint works by using the sun, when the car is scratched, the chemical structure in the paint is damaged, and so the chitosan reacts to the UV rays of the sun. This prompts synthetic chains to form with the other materials in the coating, filling in the scratch. The entire process takes less than an hour and lasts several years before the paint loses these properties.

After considering all this technology being tested by Nissan, we'd better keep an eye out for Nissan's first self-driving, self-cleaning and self-healing car in the future.