The 3D printed device is called W-TENG, a device that uses unique materials to generate electricity through motion and vibrations. The Clemson team built the W-TENG off the back of an earlier project called the U-TENG which used simple plastic and tape to generate a voltage given their opposite reactions to electrons.

The team engineered the W-TENG with a similar mindset. However, they wanted to boost the amount of electricity that could potentially be generated in a circuit and stored in a capacitor.

The researchers opted for a multipart fiber made of 'supermaterial' graphene and a biodegradable polymer called polylactic acid rather than the plastic found in U-TENG. And to replace the tape, researchers decided to use Teflon, the familiar non-stick cookware material.

"We use Teflon because it has a lot of fluorine groups that are highly electronegative, whereas the graphene-PLA is highly electropositive. That's a good way to juxtapose and create high voltages," said Ramakrishna Podila, corresponding author of the study and an assistant professor of physics at Clemson.

"It cannot only give you energy, but you can use the electric field also as an actuated remote. For example, you can tap the W-TENG and use its electric field as a 'button' to open your garage door, or you could activate a security system - all without a battery, passively and wirelessly," said Sai Sunil Mallineni, the first author of the study and a Ph.D. student in physics and astronomy.

Podila said there are benefits yet to be discovered with this technology. This could offset energy usage in outer space, in wartime, or even during oceanic research. Podila also said it could be a vital resource in areas that often lack in those resources.

"The W-TENG could be one of the cleaner ways of generating energy in these areas."

"Several developing countries require a lot of energy, though we may not have access to batteries or power outlets in such settings," Podila said. "The W-TENG could be one of the cleaner ways of generating energy in these areas."

However, the researchers said that their inventions could only bring the science so far. The rest would be up to economics and seeing if the solution would be financially viable on the market, according to director of the CNI Apparao Rao. 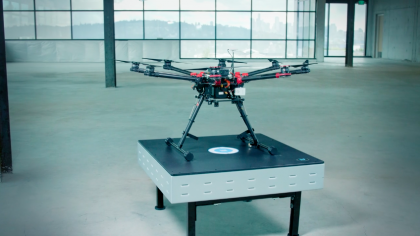 You Can Now Buy a Wireless Charging Pad for Your Drone

"We can only take it so far as scientists; the economics need to work out in order for the W-TENG to be successful," Rao said.

Rao noted that CNI is in talks with industrial partners to consider W-TENG's applications into currently used energy strategies. The W-TENG team is also currently patenting their technology.

While that discussion continues on the 'economic' end, Podila said the team needs to find an alternative for Teflon. Currently, the researchers are leaning toward MXene which is a two-dimensional compound with the conductive nature similar to transition metals. (Another Clemson student team put together a separate study regarding those findings.)

Improve Your Focus with This Cognitive Biometric Device

Improve Your Posture and Overall Physical Health With This Device