This Six-Legged Robot Keeps Plants Alive By Chasing the Sun

A Chinese roboticist has engineered a six-legged machine that allows plants to move and respond to their environment.

Plants are our useful companions on Earth. They gulp up carbon dioxide and spew oxygen, provide us with dietary and medicinal sustenance and brighten up our environment.

Unfortunately, they are notoriously the victims of circumstances. Planted in an adequately sunny spot and provided with water they bloom and thrive.

However, put in unfortunate conditions, they have no choice but to wither and die. But what if plants could move and relocate to better pastures?

It was this question that Chinese entrepreneur and founder of robotics firm Vincross Sun Tianqi asked himself while watching a dead sunflower. "I thought if it could move a little bit, take a 30-feet walk out of the shadow to where the other sunflowers were, it would have lived healthily," the entrepreneur said.

A robot that lets plant move

He decided then to build a robot that would let plants do just that: move. "With a robotic rover base, plants can experience mobility and interaction," explained Tianqui.

According to its site, HEXA is a "six-legged, highly maneuverable, compact robot that comes complete with all the necessary sensors." The result is an impressive arachnoid-like plant robot that can chase the sun, hide for shelter, interact with humans when tapped and perform a funky dance to indicate it is thirsty.

No details have been provided yet on how the plant monitors its environment in order to respond to its surroundings. However, incorporating light, shade, touch and even moisture sensors in robotics today is a rather simple procedure.

The project is actually an upgrade of a model Tianqui began in 2014 called “Sharing Human Technology with Plants.” According to Tianqui, the first prototype was "an installation project of a walking succulent plant (to be precise, an Echeveria ‘Hakuhou’)."

The invention caught the attention of ZhenFund founder and one of China's most celebrated angel investors Bob Xiaoping Xu. This led Xu to become Vincross’ first investor. 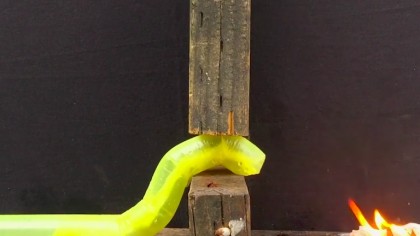 "It’s no exaggeration to say that without “Sharing Human Technology with Plants,” we wouldn’t have been able to create HEXA so quickly. So, after having built HEXA, I’d always wanted to remake the project using HEXA as its base," said Tianqui.

The current robot plant still features an Echeveria Hakuhou to "honor the original" project. However, it is safe to assume the machine can be adapted to carry other species.

Although the plant robot may have many useful future applications, Tianqi's reasons for creating it seem to have been philosophical. "When human beings go to deep ocean and moon through technology, let’s share some of the technology with plants, let them at least experience what it is like to experience the simplest of motions," concluded Tianqi.

Hate Needles? This Robot Delivers Vaccines Without Them

YouTuber Buries Himself Alive in Exchange for Likes on His Videos