With the announcement last week of the Violet Sunswift solar car’s entry in the Bridgestone World Solar Challenge, hopes are high that the model will capture another impressive victory and perhaps set a new record.

Last week on September 21st, the Violet Sunswift car set off on a 4,300km-drive from Sydney to Adelaide where it will debut at the Australia-wide Bridgestone World Solar Challenge automotive race. This race, however, is different from the one you may have in mind: the race teams will all be driving cars that use power generated from the sun.

The organizers of the challenge envision it as an exhibition representing teams who “...have achieved greatness with engineer[ing] and build[ing] a vehicle with their own hands and power[ing] it across some of the world’s most challenging landscapes.” There are three classes, which include non-competitive entries, regularity trials and a final one, The Challenger Class (the class chosen for the team), representing one-shot racing along the course.

Briefly, the race, which starts on Sunday, October 8th, will see 47 teams from more than 20 countries competing with another, traveling a stretch that covers over 3,000 km of road. Darwin and Adelaide are the starting and finishing points. The Sunswift Race team from the University of South Wales (UNSW) designed and built the model, drawing on the experience gained from the past two decades of designing and racing similar models.

A few important specs about the car:

-The PV- and battery-only range are roughly 800 km and 400km, respectively.

-The body’s weight is only about 380 kg due to the aluminum front and rear suspension and carbon-fiber monocoque chassis.

By the car’s modest appearance and relatively simple design, one might think that the team’s chances wouldn’t be so great. Simba Kuestler, the team leader, came to Violet’s defense: "Violet looks like a family sedan, but uses as much power as a four-slice toaster...[s]he's got entertainment and air conditioning systems, including navigation, reverse camera parking sensors, and there's even Wi-Fi aboard. And she's got plenty of front and rear boot space." 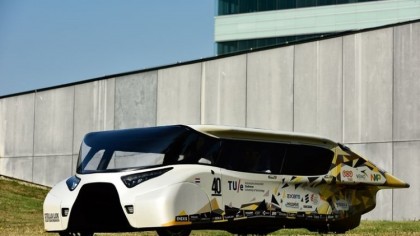 Mark Hoffman, who serves as the University’s Dean of Engineering, also voiced his strong support for the team and the valuable experience in experiential learning that can be offered by events like this:

“The car is operating at the cutting-edge of what’s possible, and the students putting it through strenuous testing ahead of a race where they will face intense conditions, so it’s no surprise they will face setbacks...[t]hat’s what an engineering degree should be about, learning about demanding, real-world challenges.”

Undoubtedly, the students must be encouraged by the knowledge that another team from their university captured the world record for the fastest long-range electric car with the eVe Sunswift model.

Although momentum has been steadily building for solar and electric cars for the past decade or so, visibility is the most important factor involved in making sure these cars and their development and marketing efforts are kept alive. More than competitions, these sponsored events’ main purpose essentially is to ensure that interest behind the solar-powered automotive industry remains healthy.

The York Factory Where the Iconic Harley Davidson Motorcycles Are Built