The Soviet pilots are buried beneath the fins of an aircraft they likely died in.

The Amari Cemetery located in Harju County, northern Estonia, is a place where you’ll witness a series of graves decorated with aircraft tail fins. The answer to why these graves have aircraft fins on them lies beneath these tombstones, with all those who are resting in these graves.

These are Soviet pilots who were killed while serving their duty during the Soviet occupation of Estonia. The burial place is truly a sight that will kindle respect for all the soldiers who put their lives on the line for their country.

What could have been a better way to pay homage to the martyrs than using the fins of an airplane that they were likely died in?

The soldiers were buried on a site that was designated for the burial of war causalities. Once the air force camp was abandoned, the graves were moved to the current location.

The camp was then leveled, as Estonia became a democracy.

Even now, the cemetery is well-maintained and surrounded by tall woods and lush greenery. Although, there is no real confirmation on whether these fins are from the exact airplanes that they died in, as the fins could have been easily procured from any Russian made planes of that era.

We think as cemeteries as something grim, but in reality, there are many fascinating cemeteries around the globe that has a story to tell of their own.

If you were to consider architectural beauty, the Pere Lachaise Cemetery in Paris should be on your list. It is the largest cemetery in Paris and is studded with expressive sculptures that will surely give you an idea of why Paris sports such a robust history in arts.

It carries the graves of Oscar Wilde, the star-crossed lovers Abelard and Heloise, and musical talents like Chopin, Jim Morrison, and Edith Piaf. The grave of Victor Noir also rests at Pere Lachaise. 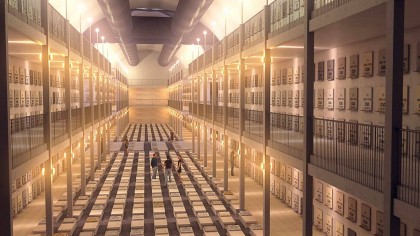 Marvelous architectural creations for the dead also carries over to Buenos Aires. If you were to examine Buenos Aires, it is the capital of Argentina and is studded with architectural marvels and why should the graves be any different?!

The La Recoleta Cemetery in Buenos Aires has an array of Mausoleums that come in various sizes, designs, and shapes; they also bear many signs of historical importance and significance.

The American Cemetery at Luxembourg

You might have seen this cemetery in movies, but the actual sight is breathtaking. The cemetery is located in Luxembourg and here lie the tombs of valiant Americans who sacrificed their lives during World War II.

Yes, a Sex Toy Company Is Launching a Rocket Into Space Filled with Sex Toys

This $57,750 Robot Table Clock Is As Intricate As It Sounds