This pumping bra was designed solely with busy nursing mothers in mind.

Lilu has come up with a pumping bra solely with busy nursing mothers in mind. Standard breast pumps are designed to save busy nursing mothers valuable time by allowing them to pump the milk and store it easily in portable containers which can be stored for later or taken with them.

Some important product specs are:

• Compressor technology that massages the breasts, with adjustable levels—recharging can be done with a micro-USB cable.

• A seamless pouch and strap design that can easily fit over a woman’s nursing bra.

Developers Sujay Suresh and Adriana Vazquez sought to design a smart product that seriously addressed the needs of busy nursing mothers and essentially began what amounted to interviews and field research, collecting important opinions and information directly from the active mothers they had in mind with the original concept. Vazquez says of the purpose behind their collaboration: “It was the first time I saw up close what it was like to be a working mother…it struck me how little I knew about the challenges that working moms face,” candidly adding that “[t]he biggest culprit was the breast pump.”

The product was presented to their peers thanks to TechCrunch Disrupt San Francisco, a group which supports and showcases the work of some of the most promising startup company talent. 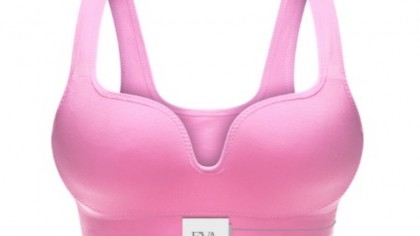 Several studies from the National Institutes of Health on methods for improving milk expression, the generally preferred medical term, have been released in recent years, and while there are a number of methods given, ranging from varying the size and type of pump to using music as a form of relaxation, it’s clear from the design that massage was the most important factor identified.

Another relevant reason the developers did not cite is various cultural taboos that affect mothers’ decisions to breastfeed in public. Moreover, travel restrictions on liquids directly affect women who travel with breast milk: in a highly-publicized case last year, a mother was forced to discard almost 15 liters she had prepared for her baby, some of which it was revealed later had actually been frozen solid, at London’s Heathrow Airport.

She said of the ordeal, “I now don't have the option to solely breastfeed my son because I don't have enough milk to supply him while I'm at work, despite all of my best efforts. Being a working mother and ensuring both my job and my child get exactly what they need is the hardest thing I've ever done but you managed to make it nearly impossible in a single afternoon,” most importantly underscoring that she felt “… completely defeated as a professional and a mother."

Working women themselves, the two developers have stepped in and made an important contribution to not only health care technology, but also women’s health. They are proving that the development of new and innovative technology must be done so with the most inclusive vision possible.