The famous peppered moth example of natural selection now has some extra validation from this quantitative experiment.

A recent study by evolutionary biologists at the University of Exeter has once again confirmed the 'Darwin's Moth' example of evolution in action. Through field studies and some experimentation, researchers were able to show that Moths' camouflage does indeed hamper or improve their chances of survival. 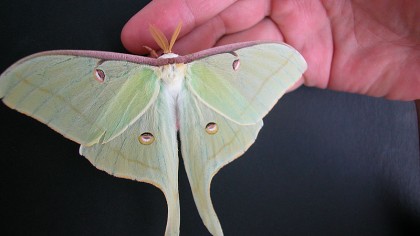 Moths Got Their Flashy Tails to Deflect Bats

To most who are au fait with the concepts of how organisms are changed over time from environmental pressures and genetics this is no real surprise, but what is interesting is the angle they took to confirm it.

They used a mixture of old specimens and artificial moths to 'look' at them from a bird's perspective. It marks one of, if not, the first quantitative study of the effectiveness of Peppered Moth camouflage using controlled studies.

In the teams own words:-

"[Therefore,] this example provides key evidence for natural selection, shows the importance of a greater understanding of the ways in which anthropogenic activity influences defensive adaptations, and can provide further insight into both predator-prey dynamics and other anthropogenic impacts".

The team of researchers at the University of Exeter were able to show the differences in survival of differently colored Peppered Moths (Biston Betularia) in clean and polluted environments, like woodlands.

This species famously comes in two distinct paler (typica) and darker (carbonaria) forms that have long been understood to provide varying amounts of camouflage depending on the environment, or surface, in which they are preyed upon by birds. But before this study, conclusions were reached without quantitative research in controlled experiments.

For instance, the pale form of the moth becomes almost invisible to predators when contrasted against lichen on the bark of a tree. The darker forms are almost highlighted by the contrast in their color and the lichen - from the bird's point of view.

The darker form is a relative newcomer to the British Isles first being noticed during the Industrial Revolution (between 1760 and 1914) when pollution killed off lichen and soot-covered anything it touched.  Evolutionists and biologists of the time coined the term "Industrial Melanism" to describe the prevalence of darker forms in the most polluted areas.

Later on, as Environmental Protection Legislation came into force (like The Clean Air Acts in the 1950s), lichen colonies were able to recover and prosper once again. This provided the paler form of Peppered Moth a much-needed reprieve allowing their populations to recover.

In 2012, another study showed that the existence of strong selective pressure against melanic forms from differing bird predation. The Peppered Moth was, in fact, a crucial early 'everyday' example used to support Darwin's Theory of Evolution by Natural Selection that can be found in many textbooks on the subject.

Unsurprisingly, this theory has not been without its critics. The most notable are amongst those in creationist movement who believe it merely demonstrates "change in a created kind".

The team's methodology was very interesting

The research team used a combination of old museum specimens and baited artificial models to conduct their field studies. Some of the specimens included examples from the collection of Bernard Kettlewell who was a famous evolutionary biologist in the 1950s.

Bernard was able to provide crucial support for the hypothesis by discovering that the more prevalent darker form (around 80% of the population) seemed to have a distinct disadvantage in unpolluted areas.

They then proceeded to study predation rates in the wild by placing the specimens, and baited artificial moths, in woodland around the UK (primarily in Cornwall).

From their results, they were able to show that paler artificial baited moths had around a 21% chance of survival. In other words, they were less likely to be targeted by wild birds when placed on lichen covered trees.

“We provide strong direct evidence that the frequency of the peppered moth forms stems from differences in camouflage and avian predation, providing key support for this iconic example of natural selection,” Professor Stevens said.

In the UK Peppered Moths are a key prey item for bird species like sparrows, great tits, blue tits, robins, and blackbirds.

What makes this study unique?

Their conclusion comes as no surprise but what is interesting is the method they used. By deciding to literally take a 'bird's eye view' of the effectiveness of the moth's ability to blend in with its natural habitats, this study provides a fascinating quantitative confirmation of Natural Selection.

They developed a method of simulating bird vision using digital image analysis, as well as field studies, to show how likely it would be for a bird to spot moths depending on their form.

“Remarkably, no previous study has quantified the camouflage of peppered moths, or related this to survival against predators in controlled experiments," said  Martin Stevens, Professor at the Centre for Ecology and Conservation on the University of Exeter’s Penryn Campus in Cornwall.

“This is one of the most iconic examples of evolution, used in biology textbooks around the world, yet fiercely attacked by creationists seeking to discredit evolution,” he added.

It is widely known that most extant birds can 'see' UV light which is invisible to human eyes. They can also perceive a much wider range of colors than we are able to.

By studying the moths using the much wider range of visible and UV light data available to birds they were able to analyze which moth form best matched lichen-covered and plain tree barks. Well-done!

The study was funded by the Biotechnology and Biological Sciences Research Council (BBSRC). It has been published in the journal Communications Biology, entitled: “Avian vision models and field experiments determine the survival value of peppered moth camouflage."

Rise of the Machines: One of These Advanced Robots May Soon Take Over the World

WWI 'Climate Anomaly' May Have Been Behind the Flu Epidemic