A new invention for assisted suicide has been dubbed 'the Tesla of death'. Its founder says the machine aims to give control and dignity to those facing the end of life.

A new controversial pod for ending one’s life is on the market and it is being dubbed the Tesla of death and its founder, the Elon Musk of suicide. The pod, developed by euthanasia campaigner Dr. Philip Nitschke, is called the Sarco and it seeks to revolutionize the way we die.

“What if we had more than mere dignity to look forward to on our last day on this planet?”

The Sarco's website features a thought-provoking question on its landing page. “What if we had more than mere dignity to look forward to on our last day on this planet?” reads the site.

A description of the pod goes on to explain that “the elegant design was intended to suggest a sense of occasion: of travel to a ‘new destination’, and to dispel the ‘yuk’ factor.” If this sounds like a macabre joke, rest assured it is not.

The Sarco, according to its founder, is a compassionate invention to give people more control and dignity in the way they end their lives. Writing in an opinion piece for the Huffington Post, Nitschke said he created the Sarco to support “the concept of a good death for any rational adult.”

“Being in control gives confidence; it restores one’s sense of self. And, yes, it generates dignity in living, knowing one will have dignity in dying,” he added.

Whether it restores dignity or not, one thing is for sure, the Sarco offers a painless death. The machine functions by administering hypoxia, a state achieved by reducing oxygen levels through the release of liquid nitrogen.

Hypoxia, as described by Nitschke, leads to a euphoric loss of consciousness followed by a peaceful death. “Ask someone who has lived through a rapid plane depressurization ― that drunk disorientation can leave you a little unsure of just why you should strap on that dangling oxygen mask,” Nitschke explained with a rather morbid example.

The Sarco, named fittingly after an abbreviation of sarcophagus, comes in three different models: a 3D printed one, a portable one and one with its own coffin incorporated. The Sarco is equipped with a touchpad inside that requires a four-digit code to release ­the liquid nitrogen. 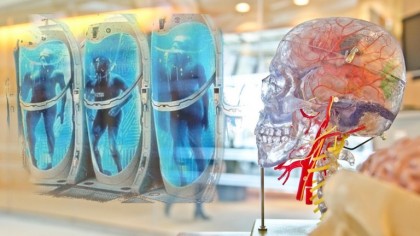 For severely disabled users, there are also the options to activate the nitrogen release through voice-recognition or eye-movement. Once the release has been triggered, the user simply slips into death.

Nitschke says he understands that his invention will “not be for everyone.” However, he plans to make its design open-sourced and “freely available on internet” in hopes that its use will “help reframe conversations about, and people’s experiences, with death.”

Nitschke is a former medical doctor and the founder and director of Exit International, a non-profit advocating euthanasia legalization. In 1996, he assisted in the euthanasia of four of his terminally ill patients through the implementation of Australia’s Rights of the Terminally Ill Act.

Fact Check: Should You Use UV Light to Kill the Coronavirus?

"Cold Quasars" Are the Harbingers of Galactic Death, Or Are They?