This Ultra-Efficient Bike Has No Chains and No Derailleurs

A new chain-free and derailleur-free ultra-performing bicycle was introduced this week by CeramicSpeed at the world's leading bike trade show Eurobike in Germany and it blew audiences away. The impressive novel prototype, called Driven, won the coveted Eurobike Award beating 365 other entries.

The most efficient drivetrain imaginable

The 21 CeramicSpeed Bearings refer to the 21 bearings featured on the Driven bike to increase its functionality and efficiency. These bearings "transfer torque from the front ring through the drive shaft, then onto the 13-speed rear cog."

Driven, in essence, functions through a pinion-style driveshaft system instead of the traditional and somewhat inefficient chain and derailleur models. The company claims their new system "creates 49% less friction when compared to the market leading chain and derailleur drivetrain."

The company achieved this by removing the eight points of sliding friction that burden even market-leading chain and derailleur drivetrains. Furthermore, replacing the metal chain with a carbon driveshaft resulted in a bike with a two-dimensional more aerodynamic profile that reduces drag and enables a lower weight.

Not the first of its kind

This is not the first driveshaft bicycle model ever experimented with by bike companies. However, previous models have always exhibited less power efficieny than chain and derailleur systems.

They also had limitations regarding the changing of flat rear tires, an issue CeramicSpeed has also not addressed. However, the model is not ready for production so time may produce an equally innovative solution. 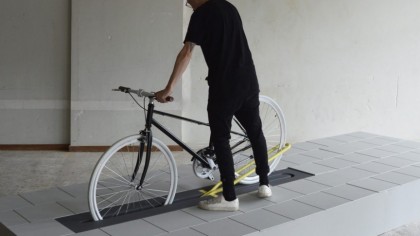 This Bike Rack Disappears Completely When Not in Use

CeramicSpeed has been working with the Mechanical Engineering Department at the University of Colorado on their Driven bike for only nine months so far. The team is already investigating integrating the driveshaft into the frame to further reduce wear and tear.

The model still needs work obviously but there is no doubt CeramicSpeed is onto something truly transformational. And winning the Eurobike award is no small feat.

The award is "regarded as one of the most prestigious awards in the bike industry" featuring the most advanced work in bike developments. "The high innovation capacity in the bike industry is closely connected to the rapidly changing market, which can be clearly seen at the Award Ceremony and in the Award Exhibition," states the award's site.

Intel Now Has a Brand New Logo and Bong Sound

This Eco-Friendly E-Bike Has Pineapple and Flaxseed Components

Novel Ultrafast Battery Based on Graphene Charges in 15 Seconds