The recently finished Mercedes-Benz stadium will seat up to 83,000 people (71,000 people 'comfortably'). It took over 39 months to complete, and the whole process can be seen in stunning 4K video in just 2 minutes of time-lapse footage.

Mercedes-Benz Stadium is one of the most impressive stadiums ever built, and this video shows just how much work went into building it. EarthCam released its most recent time-lapse movie to celebrate the new Mercedes-Benz Stadium. The stadium will be the new home to the Atlanta Falcons NFL team. It will also serve as the home for the Atlanta United FC for Major League Soccer. The movie condenses 39 months of progress in just a few minutes.

The building's exterior maintains a futuristic design with triangular steel sheets -- 23 tons of steel piecing the walls of windows together. According to the website the Falcoholic, the retractable roof "is not 100 percent ready for primetime, but it does open and close." The winning design bid came from HOK (formerly Hellmuth, Obata + Kassabaum) with the firm's insanely impressive pinwheel, eight-panel retractable roof. The design itself was meant to replicate a bird's wings extending.

"I imagined a circle of light appearing over the field and growing like a spotlight, the same way the light enters the oculus of the Pantheon in Rome," said Bill Johnson, design principal for HOK, the firm responsible for designing the stadium. "From that idea grew the structure, skin, and seating bowl configuration, so all design elements supported this big idea of bringing the energy and focus to the center of the stadium through the roof’s dramatic design."

Each roofing panel operates on two parallel rails -- one rail to stabilize and one to move it.

Another impressive feature hangs just under the retractable roof. There is a halo of video boards that enclose the interior of the roof opening. The halo board itself stands at 17m tall and over 335m around.

"We had gone to great lengths to create a stadium that was open air," he said. "The stadium experience is very much ‘in the round,’ and it occurred to us that scoreboards in the end zones and corners weren’t compatible with that big idea. So in order to stay true to the overall design idea, we had to think about the scoreboard differently."

"The exterior architecture will further enhance Atlanta’s downtown, making it a skyline that will be instantly recognizable worldwide," noted Rich McKay, the team’s president and CEO. "The interior design element that will set us apart is our halo board. It is a one-of-a-kind, 360-degree video board that is nearly six stories tall and 1,110 linear feet around. It hangs from the oval-shaped roof, opening just high enough that it doesn’t impede any of our fans’ sight lines."

The video clearly showcases the progress of the massive interior. As of June 2016, over $1.6 billion was spent by to build the stadium. It will seat up to 71,000 people but can be adjusted to fit as many as 83,000 fans. 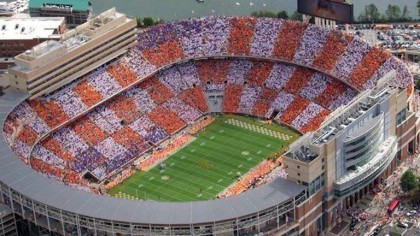 One of the best features is barely visible from the video's footage. The impressive Falcon statue comes in at a whopping 73,000 lbs (33 metric tonnes) and stands nearly 42 feet tall (nearly 13 meters).

The futuristic stadium and its impressive feats of engineering will be put to the test when the stadium holds its first official NFL game for the Atlanta Falcons tomorrow, September 17, for Sunday night football.