This Virtual Reality Dog Could Save People from Dog Bites

To spare thousands of people from bites, computer developers worked with animal rescue services to create a unique VR experience.

With over 32 million dogs owned as pets worldwide (and thousands of viral dog videos), it's safe to say dogs are fan favorite animals. However, with hundreds of thousands of dog bites occurring each year, understanding dogs can be tricky. Computer scientists created a virtual reality puppy to help educate people and, hopefully, prevent dog bites.

The Need for Virtual Reality Puppies

In the United States, over 350,000 dog bite victims are treated in emergency rooms. Costs from dog bite complications and settlements exceeded $1 billion in 2017. In the United Kingdom, there are over 7,000 hospital admissions for dog bites recorded each year. However, the University of Liverpool estimated larger numbers.

One of the most effective ways to avoid being bit, researchers said, is to know the warning signs of an aggressive dog. Dogs Trust -- a dog rehoming and dog adoption charity in the UK -- wanted to develop a way to educate the public. Specifically, Dogs Trust wanted to showcase a range of stressed behaviors normally shown by dogs when they're in a situation likely to result in a bite.

From a virtual reality perspective, the Liverpool team said they wanted to get each detail as realistic as possible for users. 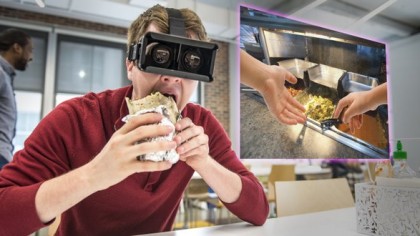 Iain Cant, VEC Visualisation Team Leader said in a statement "This was a really interesting project to work on with a lot of exciting potential for the future."

The VEC team said they want to continue using the VR environment and expand it to become more realistic.

"The next steps will look to enhance the detail within the immersive environment to ensure the simulation is as realistic as possible," Cant said. "Future developments will also show a wider range of dog behaviours and the dog’s reactions to user behaviour."

“More broadly the project highlights how immersive experiences can be used by organisations such as Dogs Trust as a valuable educational tool.”

Via: University of Liverpool