A new wearable sodium sensor has been developed by researchers. The device could improve the lives of people suffering sodium sensitive conditions like hypertension and diabetes.

Researchers have developed a thin breathable membrane that can be worn in the mouth to measure the salt intake of the user. The device is designed to help people suffering from hypertension or other conditions that can be aggravated by high sodium intake.

The light membrane works much like a dental retainer on the roof of the person's mouth. The sodium sensor integrated with a flexible electronic system that uses Bluetooth to report the user's sodium consumption to a smartphone or tablet.

The device will help people on a daily basis

The researchers are already making plans to miniaturize the device even further to the size of a tooth. "We can unobtrusively and wirelessly measure the amount of sodium that people are taking in over time," explained Woon-Hong Yeo, an assistant professor in the Woodruff School of Mechanical Engineering at the Georgia Institute of Technology. "By monitoring sodium in real-time, the device could one day help people who need to restrict sodium intake learn to change their eating habits and diet."

There is often a lot of hidden sodium in processed foods that people are unaware of. So while some people with medical conditions avoid typically salty foods like chips or salted nuts, they may inadvertently be consuming sodium through processed bakery items, condiments and even flavored chocolate.

Researchers who developed the sodium tracking device say that it could be helped to educate consumers on the amount of salt they consume. "Our device could have applications for many different goals involving eating behavior for diet management or therapeutics," Yeo said.

The breakthrough for creating the sensor came by replacing the traditional plastic and metal-based electronics of regular sodium sensors with biocompatible and ultrathin components connected using mesh circuitry. "The entire sensing and electronics package was conformally integrated onto a soft material that users can tolerate," Yeo explained.

"The sensor is comfortable to wear, and data from it can be transmitted to a smartphone or tablet. Eventually, the information could go a doctor or other medical professional for remote monitoring." The device monitors sodium intake in real time and users can see their daily intake on their phone or mobile device. 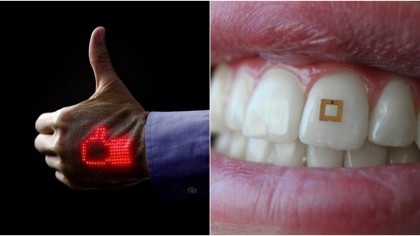 Future food consumption can be adjusted according to the up to date data on their consumption so far. So far the device has been tested in three adult study participants. The participants wore the sensor for a week eating both solid and liquid foods.

The researchers' next steps are to test the device on participants that suffer from conditions such as hypertension and diabetes. The details of the device and its accompanying research were published on May 7 in the early edition of the journal Proceedings of the National Academy of Sciences.

Know What's in the Air You're Breathing With This Portable Monitor