A new website lets you track the location of Elon Musk's Tesla Roadster as it travels through space. Ben Pearson is the genius behind the site that began after the SpaceX launch of the Falcon Heavy earlier this month.

We were granted a few wonderful hours of live footage from the dashcam of the car before it all went black. But if you are curious about where Elon Musk’s Tesla Roadster is now as it hurtles through space, Ben Pearson has you covered.

His unofficial website, Whereisroadster.com tracks the red Tesla on its journey through time and space using NASA data and its own flight modeling. The website is put together in good humor with commentary on how many times the car has voided its 58000 km warranty. It also has lots of data on the cars fuel economy, if the most famous car in space had been moving under its own propulsion.

Tesla will swing past Mars

The car’s owner, CEO of SpaceX, Elon Musk, originally suggested that the car would orbit Mars, however, according to Pearson’s site the vehicle will head past Mars before getting pulled back into the center of the system.

The great graphics on the site help make sense of where the car is in relationship to the big celestial bodies of our solar system.

According to Pearson, the Tesla will make a loose approach to Mars on June 9, 2018, at a distance of 0.740 AU. The astronomical unit of length, AU, is roughly the distance from Earth to the Sun.

Not only is Pearson putting all the data together to bring us the updated flight path information of the Tesla, he is also working on a simulated 3D view of the Roadster. He has made a little teaser video of what that will look like and promise the Starman will be added soon.

Pearson is a self-confessed space nerd, he told online media “I read every book in my little library that I could about space and space exploration stuff.”

He describes his motivation to put the site together came after the launch of Falcon Heavy and the site exploded with people eager to find out more about the Tesla and Starman. 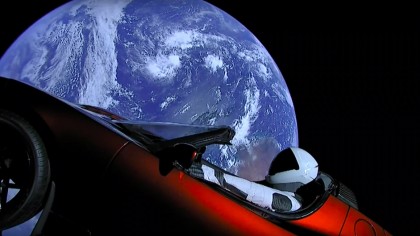 Pearson says his first attempts at putting the site together weren’t perfect, but he now has a script running that updates the website from the current data available from JPL Horizons.

He has made the website out of the nerdiness of his own heart, but if you want to support Pearson's project there are ‘goodies' on the site that you can buy that will help fund the continuing project.