YouTuber and inventor Colin Furze is known for his outlandish creations, such as a weaponized Tuk Tuk, a gas-powered baby stroller, a real-life hoverbike and a 125cc mobility scooter.

His latest endeavor involves turning a BMW E30 convertible into a driveable and heated hot tub complete with a grill built into the trunk. He released the process in a series of three videos, including every detail of construction from beginning to end.

The entire idea came about when Google UK asked Furze to create something spectacular for a Google Search campaign using materials found through Google advertisers. He came up with the Spa Car Driveable Hot Tub.

The first video shows the steps taken to strip the car of its guts, meaning Furze and a colleague took out the seats and console coverings to assess leakage potential and make the car watertight.

Working from his garage, he obtained a slightly rusted 1989 E30 beamer which he stripped of most of its electrics to start with.

“The actual ECU for the engine, we’ve pulled the whole thing through, it’s just sat under the bonnet. After that we’ll go around all the holes in the chassis and kind of put discs and blanks and stuff to seal them--then put some water in it and see what happens,” he explains in the clip.

He and his partner began the arduous process of welding the seams in the passenger floor, bolts, cables and any other space where water could seep through. He then covered the base with a coat of resin and added a plug at the bottom of the car floor to drain the car after its filled. 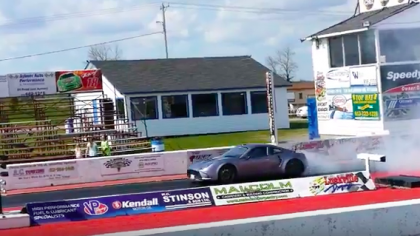 A car full of water is likely to put a strain on the original suspension, so Furze had to come up with a way to combat the excess weight. He intertwined two single springs and welded them at the top and bottom before reattaching them to the undercarriage. It did the trick, and the car was able to withstand the weight of extra water.

To add the heated portion of the Spa Car, the former plumber came up with a genius solution.

“The heater matrix that we took out gives us access to a hot water system,” he explains. Furze created a copper coil which he placed in the passenger foot compartment and attached it to the heater matrix, showing through a thermal energy camera that it worked “a treat.”

After getting through the interior work, the second video shows Furze outfitting the exterior with drain pipes, artificial grass and a BBQ grill which he disassembled and reworked to fit into the car’s trunk space.

He also attached leaf blowers to either side of the back seat and made adapters for the blower nozzle to connect to flexible tubing, which he snaked down into the tub space to create bubbles.

The last video shows Furze taking his invention out for a spin, and it is quite something to behold. Especially when he fills the water with bubble bath and fires up the grill. Watch below.