Thousands of Swedes Now Use Microchips for ID

New reports show that a growing number of Swedish people use microchip implants for day-to-day activities.

Rather than carry around keys, wallets, and identification, some 3,000 Swedes are opting for a much smaller method: microchips.

Over the last three years, thousands have opted to get a small microchip the size of a grain of rice into their skin, according to the Agence France-Presse (AFP).

The implementation isn't as painful or invasive as it might sound -- at least, not according to those who have them.

The microchip technology quickly rose to popularity in 2015, and it's become relatively 'normalized' in Swedish society. Last year, one railway line said it would add microchip scanning to its options of accepting tickets. SJ, a state-owned rail line, estimated roughly a tenth of Sweden's 2,000 "biohackers" would use the service, and it's grown since.

"Some people are confused and think they can be tracked via microchip – but [if] that's something they're worried about, they should be more concerned by their mobile phone and credit card use," a company spokesperson told media. "You can already be tracked in many different ways other than a microchip." 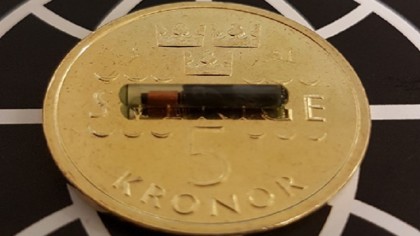 It's also being used for workplace entry. Ulrika Celsing, 28 years old, is one of these Swedish "biohackers." She injected a microchip into her hand and uses it to enter the media agency Mindshare where she works. She waves her hand on a box, types in a code, and the door opens for her. She now does more than simply get into work with her microchip. She told AFP she also uses it as her gym card, and it's turned into her own condensed electronic purse.

"It was fun to try something new and to see what one could use it for to make life easier in the future," she told AFP.

There are even come microchip companies that specialize in "implant parties" -- times when large groups of people can get their microchip implants done at the same time. (Think of it like a tattoo party but with considerably more information and data.) One of these companies is Bionyfiken that has been doing these parties for roughly four years.

"The human body is the next big platform. The connected body is already a phenomena. And this implant is just a part of it. [...]

"We are updating our bodies with technology on a large scale already with wearables. But all of the wearables we wear today will be implantable in five to 10 years.

"Who wants to carry a clumsy smartphone or smartwatch when you can have it in your fingernail? I think that is the direction where it is heading."

On a broader scope, this reliance on technology rather than more traditional methods seems to align with the Swedish culture's love and acceptance of technology. According to reports, only 2 percent of the entire country's financial transactions are done using cash. Everything else is done via credit card, debit card or electronic mobile payments (i.e. Apple pay). By comparison, the United States conducts 33 percent of its transactions using cash.

Apple Has Called Off Its Child Sexual Abuse Scan Campaign. For Now