A video featuring a time lapse of a dandelion blooming created in 2010 was recently posted to Reddit as a GIF, and it has taken internet by storm.

By  Loukia Papadopoulos
May 20, 2018
Neil Bromhall/Youtube

A YouTube video posted in 2010 by award-winning British photographer Neil Bromhall is making a come back after a GIF version of it was published this week on Reddit. The video shows a time lapse of a dandelion blooming and people are riveted by its beauty.

Bromhall called the video a "Time lapse transformation from dandelion flower to seed head" and said it was continuously filmed over one month. The photographer also wrote that the "sequence was filmed for the interactive plant identifier and pruning guide encyclopedia."

Bromhall added that, although dandelions are considered weeds, he finds them very beautiful. The internet, it seems, agreed.

"I really have no idea why but for some reason this makes me so happy. Thank you for posting," wrote a grateful Reddit user.

"I didn't realize that they 'cocooned' in order to get to the poof state. No wonder I've only ever seen them in the flower or poof state," wrote another impressed poster.

Others said the GIF dispelled some of their long-standing faulty beliefs. "I spent a really long period of my life thinking there were white dandelions and yellow dandelions. Two kinds. I didn’t realize for a long time that one turned into the other," wrote one poster.

"I always thought one was the male and the other was the female, I didn't know they were different stages," said another enlightened Reddit user.

However, not all feedback was good. Some people used some colorful swear words to lament the abundance of dandelion weeds in their lawns. 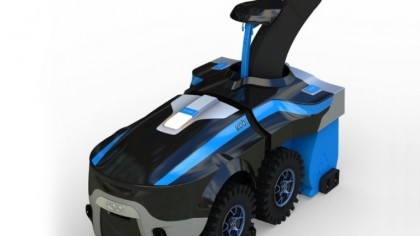 This Robot Will Shovel Snow, Trim Your Grass, and Get Rid of Leaves

"I like to give ‘em a good kick when I see them," said a clearly irritated poster. "KILL the aphids!!!" wrote another.

In response to the positive feedback, the poster made sure to attribute credit for the mesmerizing GIF where it was deserved. "All credit goes to Neil Bromhall, all I did was take his video, speed it up a bit and make it into a gif," he wrote in the comments.

Dandelions, recognizable by their bright yellow color, are a large genus of flowering plants from the Asteraceae family. Although often considered troublesome weeds in gardens, dandelions are entirely edible, have many medicinal herbal uses and provide a good source of nectar and pollen for insects.

Dandelions are known for encouraging biodiversity by supporting key species in local ecosystems. They also protect the soil through their strong taproots that break up compacted earth to create channels for air, water and insects to penetrate.

Dandelions' large leaves provide shade for the soil, conserving key moisture. Finally, since the plants draw calcium, iron, and potassium into their leaves, when they die they decompose to generate mineral-rich organic matter. Not bad for a weed!