It's easy to see electronics converting electricity into heat. However, the reverse is quite rare to see. Engineers from Sandia National Laboratories have created a tiny silicon-based device that can take heat and convert it into electricity.

"We have developed a new method for essentially recovering energy from waste heat. Car engines produce a lot of heat and that heat is just waste, right? So imagine if you could convert that engine heat into electrical power for a hybrid car. This is the first step in that direction, but much more work needs to be done," said Paul Davids, a physicist and the principal investigator for the study.

The findings and more details about the impossibly small device were recently published in the journal Physical Review Applied.

Smaller than the human pinky nail

The device itself isn't just comprised of silicon. The small converter is the result of common materials like aluminum, silicon and silicon dioxide (aka glass) combined in a unique structure. The device is smaller than the human pinky nail, and only measures 1/8 inch by 1/8 inch (roughly 3 mm by 3 mm). The shiny metallic exterior is etched with stripes about 20 times smaller than the width of a human hair. Those etchings serve as a sort of funnel for the infrared radiation into this thin layer. That radiation gets trapped into the silicon dioxide, resulting in electrical oscillations measuring 50 trillion times each second. This creates a back and forth of electrons between the aluminum and silicon, which results in a DC electrical current.

The whole process is scalable thanks to how the team structured the infrared rectenna.

"We've deliberately focused on common materials and processes that are scalable. In theory, any commercial integrated circuit fabrication facility could make these rectennas," said Joshua Shank, electrical engineer and the paper's first author.

Even though the tiny device is made of common materials, getting the correct mix of them and building the device wasn't easy.

Rob Jarecki, the fabrication engineer who led process development, said, "There's immense complexity under the hood and the devices require all kinds of processing tricks to build them."

The team admits their device has room for improvement, but the gadget itself is promising. The version of the rectenna reported in the journal only produces 8 nanowatts of power per square centimeter when exposed to a heat lamp at 840 degrees Fahrenheit (449 Celsius). In order to power a standard calculator, the team would need a group of rectennas larger than a piece of paper to convert enough energy. 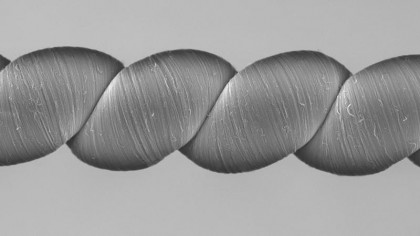 Shank said, "We need to continue to improve in order to be comparable to RTGs, but the rectennas will be useful for any application where you need something to work reliably for a long time and where you can't go in and just change the battery. However, we're not going to be an alternative for solar panels as a source of grid-scale power, at least not in the near term."

Davids added, "We've been whittling away at the problem and now we're beginning to get to the point where we're seeing relatively large gains in power conversion, and I think that there's a path forward as an alternative to thermoelectrics. It feels good to get to this point. It would be great if we could scale it up and change the world."

The Internet of Senses: Any Flavor You Want