Today is Pi Day: The Key Facts Behind the Number That Captivated the World for Over 4,000 Years

Today is National Pi Day -- a day to celebrate one of the most popular mathematical concepts.

Every March 14, mathematics fans (and foodies) around the world celebrate National Pi Day. This year, the pseudo-holiday celebrates its 30th year of existence since physicist Larry Shaw started the festivities.

While the holiday doesn’t explicitly celebrate its homonym food equivalent, it gives people a chance to combine their loves of desserts and math.

Centuries pass and people remain fascinated by the world’s most famous infinite decimal. But how exactly do we use pi, where did it come from and why are the world’s mathematicians still singing its praises?

At its core, Pi can simply be defined as the ratio between a circle's circumference and its diameter. Another way to phrase it would be pi = circumference divided by diameter. No matter how big or small a circle, pi always remains the same.

As it's one of the most popular irrational numbers, it holds a lot of intrigue for math students of all ages. It can't be represented by a formal integer because it's an infinite decimal. However, the word "infinite" rarely stops people from trying to memorize as many digits of pi as possible. Currently, Guinness World Records lists that Lu Chao of China can recite 67,000 decimal places of pi. Thanks to computing powers, the Pi-Search Page website has discovered pi to currently be at 200 million digits -- and counting. For an idea of what pi's random numbers could sound like in a unique way, one YouTube video ascribed different tones to each number and put it to music:

Where did Pi come from?

Pi is one of the oldest mathematical concepts. While it takes its name from the Greek alphabet, it dates back nearly 4,000 years and can be credited to the Babylonians. The earliest understandings of pi were calculated to be roughly 3.125 -- slightly off from its current understanding. Egyptians quickly followed with their estimations of pi at 3.1605; their calculations can be traced back to 1650 BC. The date even makes it into biblical records in the book of 1 Kings.

Archimedes of Syracuse was the first to formally calculate pi using the Pythagorean Theorem. He based his calculations off of the area of a regular polygon inscribed within the circle. He concluded that pi's values were somewhere between 3 1/7 and 3 10/71.

And the accuracy and calculations have continued to be applied in a variety of maths topics -- not just geometry!

The Legacy of Pi

In honor of today, a lot of businesses are celebrating both math and food. The Google Doodle features pastry chef Dominique Ansel crafting a unique (and tasty) representation of the mathematical concept. 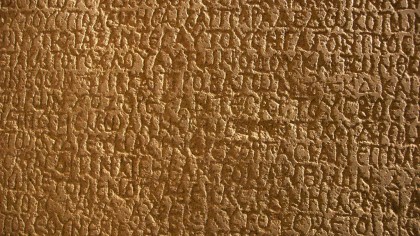 The Most Common Uses of All the Greek Letters in Science, Maths and Engineering

However, despite these seemingly popular celebrations, a growing number of mathematicians around the world refuse to recognize Pi Day.

The first complaint comes from the order in which Americans write their dates compared to most of the world. The U.S. is one of a handful of countries that writes their dates Month/Day/Year; a lot stick to Day/Month/Year. In the latter format, Pi Day would be an impossibility.

There are also calls that Pi -- while the more popular geometric value -- would be nothing without Tau. "Tau Day" would be dedicated to the "true circle constant" according to a manifesto written by math fan Michael Hartl.

Whether you're a Tau fan, a true Pi fan, a general maths lover, or you just really enjoy any excuse to eat a slice of pie, we wish you a happy Pi Day!