Today is the Anniversary of Humanity's First Flight

114 years ago today, Orville Wright took off in mankind's first primitive airplane. The first flight was only 12 seconds, but it paved the way for modern aeronautics.

On the 17th of December in 1903, Orville Wright experienced mankind's first flight in a small plane he built with his brother, Wilbur. The flight didn't make it to 30,000 feet, but it was the foundation upon which modern air travel was built. Before their landmark victory over gravity, it was never certain whether Man would ever leave the Earth. But with their device as inspiration, more than a billion people fly in airplanes every year, and many of the techniques present in their work also gave us a foundation for space flight.

The first airplane designed by the brothers, the Flyer, was over 600 pounds and included a 200-pound propulsion system. They made calculations for how large the wings of the plane would have to be by creating a wind tunnel experiment and scaling the results up to a craft that could hold a human. Their first design required a wing area of 500 square feet, with a wingspan of 40 feet, to create the required lift to pull the pilot, the steel frame, the propellers and the engine into the air. 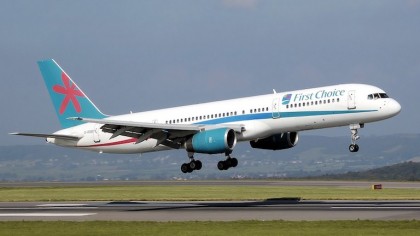 Why Planes Can't Take off When It's Too Hot

The Flyer used a 4-cylinder water cooled engine with 12 horsepower to get the plane up to flying speed. For reference, modern jet engines pull upwards of 100,000 horsepower. The Flyer also had three different controls: a wing warper allowed for lateral balance, a movable rudder for small adjustments, and a sail elevator to control the pitch. These controls are still used by modern planes as well, albeit with a little bit more sophisticated control panels.

The propulsion system required a minimum amount of strength to power the prop, but none of the Wright's local manufacturers were able to produce engines with enough power. So the brothers built one themselves.

They knew the engine was going to have to be powerful, but it was paramount that it also be as light as possible; any extra weight would make the flight that much more difficult. They decided on an aluminum crankcase design. Aluminum is super light and durable for its weight, and it is still used today in the construction of many aircraft parts.

The plane had two 8-foot long propellers made out of wood that spun in opposite directions to eliminate the gyroscopic effect. They were spun by a belt twisted into a figure eight, that was powered by their 12 horsepower engine.

This triumph of engineering is why the Wright Brothers are called the Fathers of Flight. Many of the things that the Wright Brothers made possible were considered to be a fantasy, but they were never going to allow someone to tell them that they couldn't do something. They spent years studying and improving their knowledge of physics so that they could beat gravity and give life to aeronautics. Without the technological innovations they were responsible for, there would be no airlines, and it's likely that we would be decades behind on space exploration as well.

Via: Smithsonian Air and Space Museum

9 of Humanity's Most Important First Inventions

The Truth About Teleportation in Today's Age