Which country produces the largest number of engineering graduates per year? The United States? No. Japan? No. These two countries might be the obvious choices but it looks like neither one of them made the top of the list. 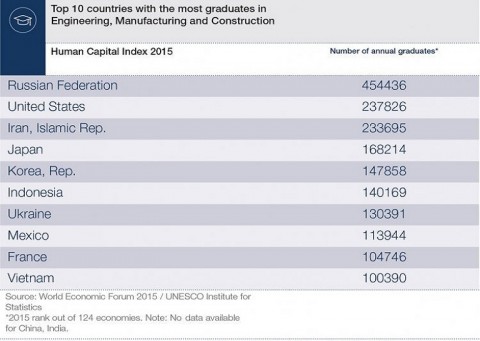 The top 10 countries with the most number engineering graduates  [ Image Source: UNESCO Institute for Statistics ]

Where is China and India you ask? Surely the two most populated countries in the world have to be there somewhere. Well it seems like nothing has been said about them because no data was available from these two countries.

Normally, it is expected that countries such as the United States and Japan would make the cut. But what is even more interesting is that some of the developing countries are also starting to make the top 10 as well. Countries such as Vietnam and Indonesia can be seen to produce over 100,000 engineering graduates annually. An impressive feat indeed. 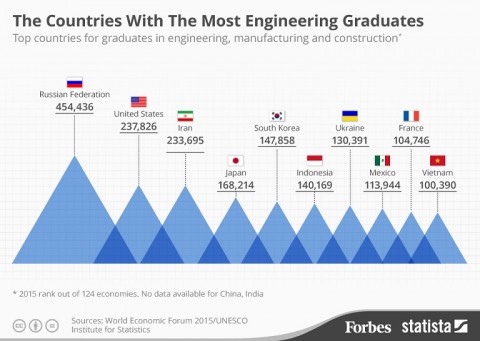 The top 10 countries with the most number engineering graduates [ Image Source: Statista , Forbes ]

According to the World Economic Forum, "talent will be the key factor linking innovation, competitiveness and growth in the 21st century". Based on these pieces of information, it seems like developing countries such as Indonesia and Vietnam might just have a very bright future ahead of them.