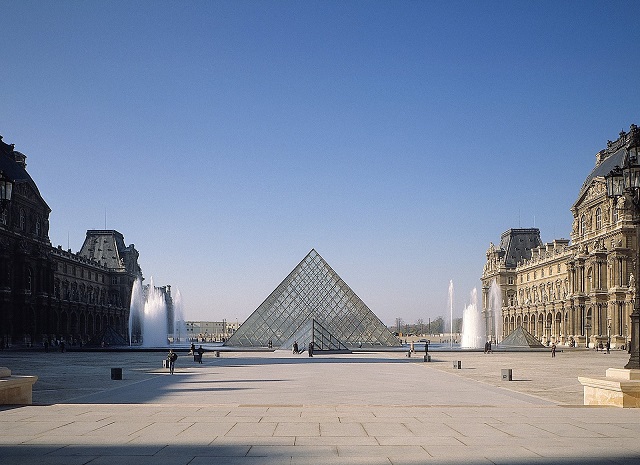 Located in the main courtyard of the Louvre Palace, this large glass pyramid serves as the main entrance to the Louvre Museum in Paris, France. Although the Louvre pyramid is small, 21.6 m in height, compared to the other buildings that will be covered here, it still stands out as an elegant piece of glass architecture and engineering. With 603 rhombus-shaped and 70 triangular glass segments, the structure modernizes the Louvre Palace with great sophistication. A monumental piece of art structure, the Louvre Pyramid also adds romance to the French capital.

Federation Square's unique structural form supports the distinct tectonic geometry of the glass facade. The cladding materials, sandstone, zinc, and glass have been incorporated within a triangular pinwheel grid. Then a cascading system of triangular panels ultimately make up the 'mega panel', that is outfitted onto the structural frame to construct the glass facade. Standing as a new civic precinct in the heart of Melbourne, Federation Square is a structural beauty to behold. 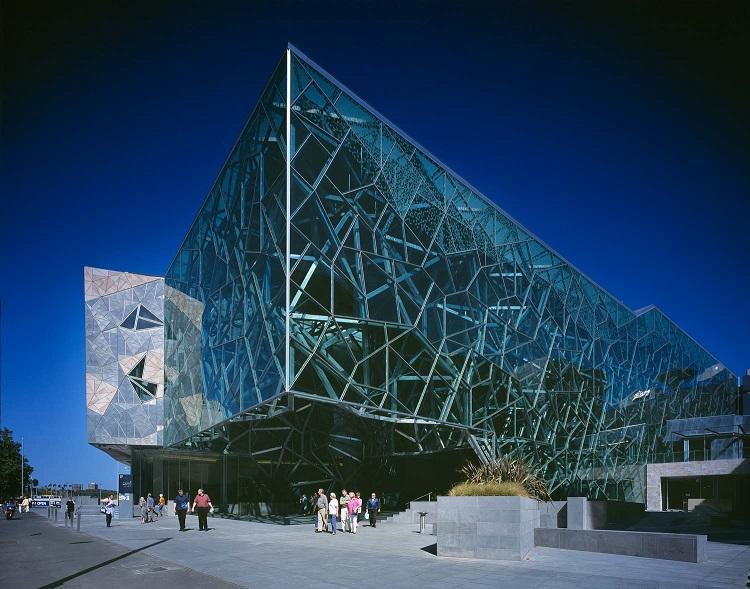 Resting only on a single point, this versatile building floats above the bustling city of Copenhagen. The Crystal building's glass cladding reflects daylight and its surroundings using double-glazing glass. The glass features integrated sunscreen that permits the building to adapt to altering light conditions. Apart from its attractive aesthetic system, the outer glass also includes a subtle silk print design that controls the flow of sunlight giving life to the ambiance of the harbor area. Representing the Scandinavian definition of subtlety, this glass structure echoes technical precision and elegant artistry. 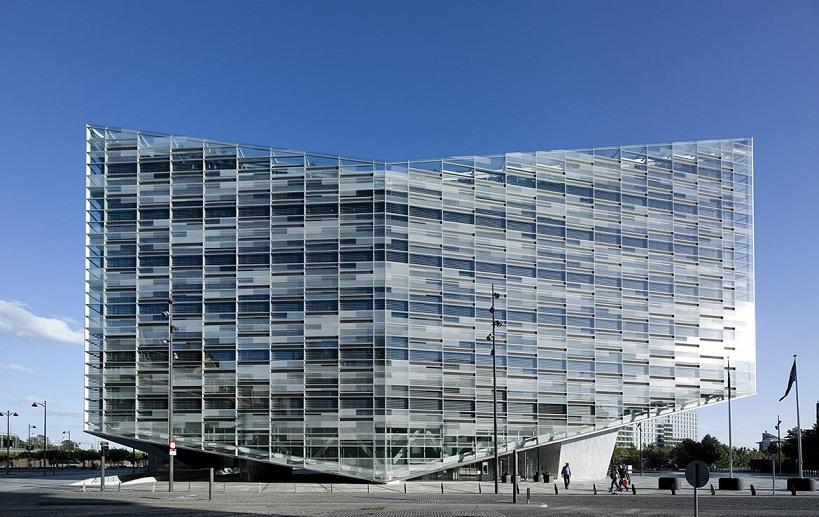 The glass facade of GT Tower in Seoul, South Korea is designed with a wave motion effect adding complexity to the nature of the cladding system. Its curvaceous edges set the building apart from every other glass facade structures here. The tower's design was inspired by the form and flow of traditional Korean poetry. The glass facade's alignment allows natural light to penetrate through the building to provide illumination. Serving as office spaces, the curvy glass structure is also a monumental landmark in the oriental city. 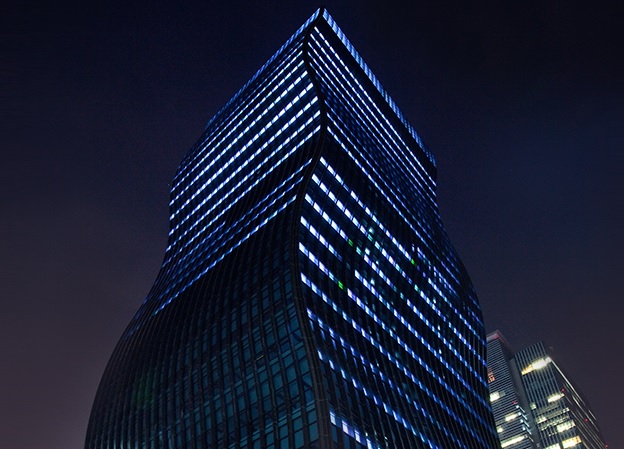 Designed by renowned Swedish architect Gert Wingårdh, the Emporia building is clothed in a golden glass facade that permits daylight to penetrate the courtyard's entrance. This mixed-use structure is one of the biggest shopping malls in Scandinavia and stands as Malmö's monumental landmark alongside Malmö Arena and Hyllie railway station.

Berlin's Reichstag Dome is a beacon of the city's past as it was built to transform the Bundestag building that was wrecked by war. Serving as a viewing area, the dome is an architectural feat which holds a strong commitment to sustainability. To utilize natural light, the dome is built with a glass facade designed to pay careful attention to the movement of the sun. It advocates openness and reflects daylight all throughout and within the structure with its dome shape clad with glass. The intelligent glass system is automated with solar shade protecting the interior of the building from unwanted, direct solar gain.

A renewable bio-fuel system burns refined vegetable oil instead of fossil fuels to provide energy to the building, resulting in a 94% reduction in carbon dioxide emissions. The dome's sustainable design causes it to produce more energy than it consumes and essentially performs as a mini power station for the new Bundestag quarter. Reichstag dome symbolizes the city's past while confidently embracing the future of its surroundings. 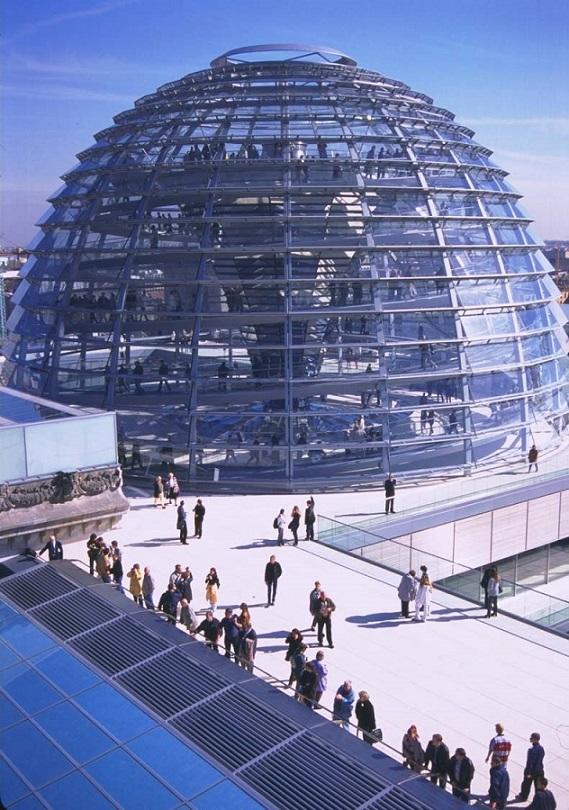 Standing high at a height of 306 m, the Shard is the tallest building in Western Europe and an iconic glass structure at the heart of London. The building has a blue glass cladding of extremely high quality, which is designed to reflect the sky, clouds, and sunlight. It shimmers like a shard of glass during a bright, sunny day providing a beacon right in the middle of the city.

Of course, we can't talk about the Shard and not discuss the world's first top-down construction technique used to construct this glass tower. The first 23 stories of this 72-storey concrete core building were built before the basement had been fully excavated. This stunning glass structure is both an architectural and engineering marvel. 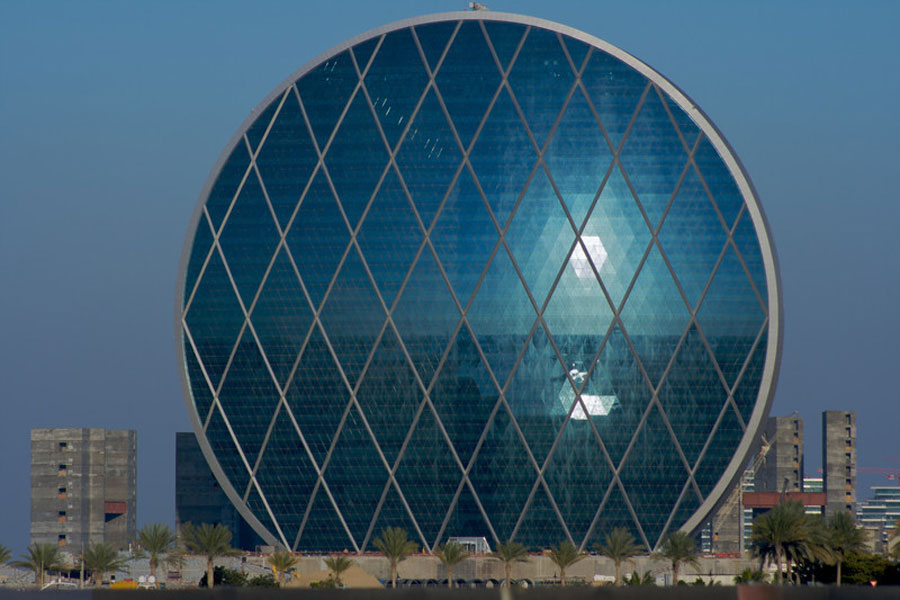 Inspired by nature, the geometric glass facade of the Harpa Concert Hall was designed from the characteristics of the region's local basalt formations. As the building reflects and captures natural light it promotes dialogue between the building, city, and ambient profile. The glass facade was conceptualized to "dematerialise" the building as a still life entity and allow it to interact with the surrounding colors. The life of the building is sourced from the city light, ocean, and glow of the sky. Henning Larsen, Harpa's architectural designer, explained the concept behind their building facade system.

"Made of glass and steel in a twelve-sided space-filling geometric modular system called the 'quasi-brick', the building appears a kaleidoscopic play of colors, reflected in the more than 1000 quasi-bricks composing the southern facade".

Towering above the concrete jungle of New York, One World Trade Center is a monumental glass-facade structure built to re-establish the lost past of the city. The structure rises above the financial district of lower Manhattan and is one of the world's tallest skyscraper. A shade of blue, luminous glass curtain wall clad the tower from the 20th floor up to the observatory, giving it a crystalline elegance.

One World Trade Center from The Durst Organization on Vimeo.

Looking vulnerable due to its extreme height of 541 m, the glass units can withstand large wind loadings applied to supertall buildings meeting the strict safety measures required for this type of structure. Moreover, it's the first skyscraper to install insulated glass that spans the full floor-to-floor height of each story without using intermediate mullions or connecting bars. And learning from the tragic history of the World Trade Center complex, this new tower was redesigned to withstand a truck bomb after the glass facade failed during initial testing. The first 20 stories were originally designed with a concrete facade but the structure had to be remodeled to have a glass-sheathed base as critics said that the building looked uninviting and that it appears to be more of a fortress. 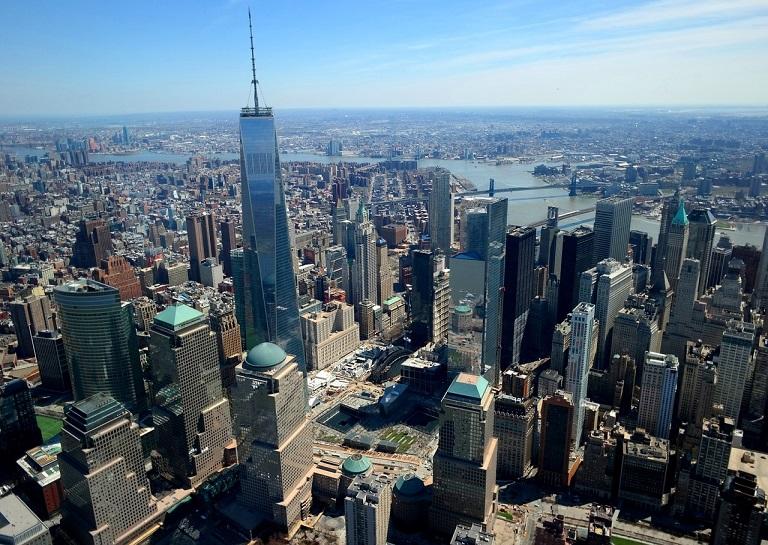 Serving as office suites to the large business network of the country while providing an unprecedented view over the City, One World Trade Center is also a significant and memorable architectural landmark recapturing the skyline of New York.

These glass structures are simply stunning and incredible in their own right. Let us know in the comments section if there are any glass facade structures you want us to know about - share with us those buildings that capture and inspire you.

SEE ALSO: 5 Most Challenging Tunnel Constructions Around the World