Here are 12 remarkable car stunts that show a perfect synchronization between man and machine.

A car isn’t just a medium to get from point A to point B for the thrill-seeking stunt drivers. As a matter of fact, ever since cars became normal parts of our lives, it didn’t take long for us to try out doing crazy things with them. 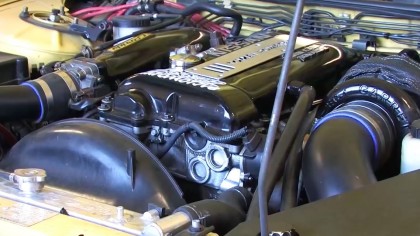 14 Cars With the Best-Sounding Four-Cylinder Engines

Enthusiasts and hobbyists all-over have tried to attempt some of the brilliant stunts in the name of adventure, demonstrating the limits to which cars can be pushed. Some of them may have injured themselves and failed miserably, but there are few remarkable car stunts that show a perfect synchronization between man and machine; the application of science and engineering at its best. The list of best car stunts is as such to honor those men for bringing spectacular visuals that are always exciting to watch.

Internet’s most popular Hoonigan, Ken Block is known for creating some of the finest tire-smoking videos of all time. The Gymkhana video series is indeed one of the coolest car stunt videos on the web, known for precision drifts, rally-jumping, and showmanship. There are 9 videos produced already in the series garnering millions of views, and the 10th one is already planned to be launched this year. In his 7th video, Ken uses the custom-tuned 1965 AWD Hoonicorn Ford Mustang to drift around LA’s popular spots and in shallow waters. The drift under the bouncing low rider further showcases precision at its best.

Meet the 4-times off-road racing champion, ‘Ballistic’ B.J. Baldwin putting his ultra-powerful Chevrolet Silverado Trophy Truck to test the terrains of Ensenada, Mexico – home of the Baja 1000. Baldwin tears through Ensenada for nearly seven minutes with some breath-taking spins, burnouts, powerslides and jumps to push the 850-hp Truck beyond its limits. The slo-mo jump sequences in the videos and precise control through the narrow streets will likely put you on the seat’s edge.

The re-engineered 2,000 hp semi-truck is designed to perform on racetracks developed for high-performance cars. Size Matters 2 is a gymkhana styled video involving Mike Ryan, a veteran stunt coordinator, drifting the 10,000-pound race truck on the docks of Long Beach harbor. The video shows precise control of the truck when drifting around semi-trailers and also a visual of jumping over a line-up of 5 cars. It is a video you certainly would not forget soon.

In 2011, Rod Dyrdeck, the MTV reality-show personality and a professional skateboarder performed a kickflip with Chevrolet Sonic. Performed for the first time, Dyrdeck successfully managed to turn the Sonic 360-degrees in mid-air. This stunt was part of a Chevrolet ad campaign and the car was specially modified for the stunt. While the video may not give that cinematic feel, it does remind us of the legendary Astro Spiral Jump from the Bond Film “The Man with the Golden Gun” that used AMC Hornet for the jump.

Flipping a MINI in the Alps

Teaming up with Monster, MINI came up with this spectacular promotional stunt and claimed it the world’s first non-assisted backflip in the Alps. Guerlain Chicherit, the stuntman managed to take off the modified John Cooper Works MINI from an 8-meter ramp, perform a complete 360 backflip and land it successfully with all four wheels on the snowy ramp.

Tanner Faust, the Yellow Driver of Team Hot Wheels broke the world record for distance jump in a four-wheeled vehicle. The promotional stunt was a part of celebrating the 100th anniversary of the Indianapolis 500. Foust succeeded in dropping the car from a 10-story, life-sized orange toy track to jump 332 feet and landing near perfectly. Foust broke the record of 301 feet, set by Johnny Greaves in 2009.

This one doesn’t involve jumping over ramps or performing a backflip. In 2008, Chinese stuntman Liu Suozhu, also called “The Car King”, successfully drove his car on the suspended cables to cross the Miluo River in China. It took 30 minutes for Liu to drive his car over 47.7 meters of cables suspended over the river. The stunt involved merely two months of preparation. Liu said that the last few minutes were the hardest as the steep inclination blocked his rear view, which made it difficult to align the tires with the steel cables.

Konstantine Petrijcuks, Steve Curtis and their skydiving crew shot this video to give a sense of what it would be like to freely fall with a car. Shot over Area 51 in Arizona, the team worked out a lot before attempting this stunt. The drivetrain and the fluids were removed and the roof was stripped off to avoid interfering with the aerodynamics during the freefall.

It might look like one of the famous car stunts in a movie, but this stunt is real and it was actually performed by Lotus F1 team for an EMC technology advert. The video shows a giant truck jumping over a speeding F1 car, creating a sensational visual to watch. The stunt also led the Lotus team to hold the world record for making the F1 transporter to clear the longest jump of 83 feet and 7 inches.

Terry Grant, the stuntman to drive the Jaguar’s new E-Pace managed to set Guinness World Record for the “Furthest Barrel Roll in a Production Vehicle”, as a part of launching campaign. The jump required Grant to achieve the correct speed to hit the 525 feet launching ramp. With 5.5Gs of force, Grant managed to successfully land the E-Pace with a 50-foot barrel roll.

Folks at Top Gear are known to break things, but not world records. However, this time they succeeded in breaking the world record to do a double loop the loop in a car. The stunt was performed in Dublin in 2012, in front of 15,000 people.

Via: How Stuff Works, Autoweek, DailyMail