Check out the list of the world's greenest university campuses and their sustainable on-campus practices.

Universities around the world have a mission to provide future professionals with an integral education that facilitates the adequate development of their abilities in favor of the community. That is why the values that govern one institution or another constitute an essential factor when young people face the decision of entering university classrooms.

In this sense, more and more universities around the world have started paying attention to the importance of incorporating sustainability as a part of their organization, culture and even their architecture, so that students live sustainable actions as daily practices.

Let us check out the top 17 greenest university campuses around the world and their sustainable on-campus practices to take a leaf out of their very impressive books!

The Simon Fraser University has contributed immensely towards environmental sustainability through its green initiatives in its Burnaby and Vancouver campuses. They have as many as seven buildings that come under this initiative, which include the School of Business and a gym.

The greenest university also established academies and strategic plans to promote green initiatives. Moreover, they also had the Green Campus Summit in 2007 for all the universities and colleges that are in New England and Atlantic Canada.

The University of Alcalá is considered the 3rd most sustainable university in the world according to CoolMyPlanet. It has numerous practices in favor of the environment through activities ranging from recycling to energy efficiency, including transport and water.

Even their teaching practices are green since, within their study programs, one can find a degree in environmental sciences to doctorates in climate, space research and the management of water resources. In addition to this, the Green Metric International Index, which assesses the sustainability policies of universities, has placed it as the most sustainable institution in Spain for four consecutive years.

The Universidad Iberoamericana in Mexico City is actively committed to sustainability and the reduction of its environmental impact in order to provide knowledge and train conscious and responsible professionals that are capable of developing their skills through ethical and ecological practices.

In addition to reporting and reducing its greenhouse gas emissions, the university incorporates sustainable transport practices linked to its activities and trains its staff by promoting the understanding of socio-environmental issues and sustainability principles, so that they can be translated into a commitment of action in favor of the environment.

This private university has its own renewable energy facilities. It runs a biofuel plant and also recycles edible oil to generate energy. The administration includes three sustainability committees, and the university aims to reduce its greenhouse gas emissions by 75% by the year 2030.

Furthermore, 50% of the budget of the cafeteria goes to the local market, and the dormitories & academic buildings have containers for recycling and composting. All the students learn about sustainability in their first year of college and have the option of living in a sustainable dormitory.

From its facilities to its organizational culture, the Autonomous University of Nuevo Leon takes sustainability very seriously. They implement environmental management programs and a tool called "Control Panel" that allows the measurement of results in a constant way in terms of energy efficiency, water use, and even student participation.

This control panel is still awaiting approval to include information related to the occupation of spaces, green areas and construction in the different university campuses.

The University of Central Lancashire launched its Energy Board in the recent years. This device allows both students and academic & administrative staff to know about the water and energy consumption of each building on campus.

It also shows the impact of each of the actions of the university community for the benefit of the environment and constitutes a means of two-way communication between users and members of the university's Green Team.

This university received the Green Campus Award in 2010, thanks to its sustainable commitment as a student initiative that received full support from the institution. This was done in order to combine all the activities carried out on the campus in favor of the environment for the formation of a comprehensive program.

The initiative was designed to empower students and promote their development in the field of sustainability while promoting the creation and implementation of new projects that materialize in environmental benefits for the campus. In this way, the University College Cork has become one of the most sustainable universities in the world for its great energy efficiency, the proper use of its resources and the waste reduction programs implemented in the institution.

The commitment of the University of Murcia to sustainability began in 2007 with the arrival of its Green Campus project. This project depends on the Technical Unit Area of the Vice-Rectorate of Economy and Infrastructure.

Since then, the initiative has worked to improve our environment and the environmental awareness of the university community. In 2009, Plaza de la Sostenibilidad was inaugurated, where Campus Sostenible carries out its environmental education activities such as courses, workshops and guided tours for students.

That same year, the Eco-Campus ırchards project was inaugurated, furthering their motto of living a “green” life.

This university is worthy of the first place for having "one of the broadest and most ambitious environmental policies" seen, both by the community and by the judges. Greenwich has achieved a 22 percent reduction in carbon emissions since 2005, and within its long-term management plan, it established a reduction of 40 percent in the next 10 years.

Likewise, the university’s work in raising awareness on the issue of environmental sustainability among academic staff and students were also praised.

The University of Ottawa is known for taking many initiatives and creating action groups to promote sustainability and go green. The students also participate actively in supporting such initiatives.

There are events focused on promoting sustainability that include a green week and sustainable development. These programs and events aim to bring more awareness amongst students about adopting a sustainable lifestyle.

The campus has taken a pledge towards going green, and the alumni, current students, and faculty work tirelessly to make it a reality. The students are also trying to take this outside the university campus and include more and more people in this sustainability drive.

One of the most popular green initiatives of the University of Sussex, United Kingdom includes waste management programs, a campus garden, and food markets. As a part of this “green strategy,” the students of the university aim to raise awareness towards the multitude of environmental issues through a plethora of fun activities.

They also organized a green week in March 2011 in order to “bring people together” through a series of green and eco-friendly events. In addition to that, they held several campaigns consisting of sweatshops, talks on sustainable fishing, etc. to prompt people into direct action.

Their attempts to go green continue and that is evident by their frequent green campaigns and fresh campus environment.

Even though the University of Nottingham recently lost its crown of being the world’s greenest university, that has in no way stopped the university’s attempts in regards to living sustainably. It is thanks to this effort that they still maintain their ranking in the top 2 greenest universities in the world.

Not only that, but this university also ranks the highest on a world scale for the Climate and Energy Change Indicator. The two main focuses of the university are transportation and recycling, but it is, in reality, the student action and the green campuses that are the heart of the university’s environmental campaigns.

The Nottingham University works every day to enhance environmental awareness, and a perfect example of this stratagem is the university’s student union. They even offer gardening sessions to interested students for a greener approach towards living.

The University of Connecticut first devised its Environmental Policy in 2002. It has only grown since then to turn into a comprehensive program that focuses on sustainability and development.

One of the university’s integral mottos is to heighten the green purchasing standards and enhance the local ecosystems in addition to natural landscaping. They also hope to be able to boost the local food production in years to come.

Moreover, there are countless recycling events held on site in order to reach its targets of low energy. Their eventual long-term aim by 2050 is reaching carbon neutrality.

Many projects on water conservation are also underway to help conserve drinkable water and improve the water quality.

Oxford University takes pride in making environmental sustainability its top priority. To maintain this drive, they have also developed a comprehensive policy for ecological sustainability and is working towards attaining it completely.

Some of their sustainability plans include improvisation of running and cycling facilities. They are also undertaking several energy audits for all their buildings. Having said that, their target is to reduce carbon emissions by 33% till the year 2021 as compared to what they had in 2005 and 2006.

Through their energy programs, they have started research in several areas, ranging from transport to teaching. They have been doing very well in the area of transportation by encouraging sustainable travel options on their university campus.

The university also provides loans that are interest-free to buy bicycles and discounts on bus pass to use public transport or other train routes.

Wageningen University in the Netherlands has been amongst the top universities in the GreenMetric Release and has successfully outperformed all the other universities in the country. Their mission is to improve the overall quality of people’s lives and explore the true potential of mother nature.

The university announced its accomplishment of climate neutrality in 2015 when it showed a higher CO2 compensation than it emitted. Several graduate programs at Wageningen University offer courses related to environmental sustainability which forms an integral part of the lifelong learning program that they offer.

They also have a “green man” which is literally a man who is in a green-colored morphsuit and walks around the campus with an aim to raise awareness amongst people about environmental sustainability.

The University of California Davis has been successful in scoring the highest on the three key indicators of environmental sustainability that include sustainable transportation, sustainable waste segregation, and setting & infrastructure. They are also in the process of building a large-scale sustainability program that aims at making the university completely carbon neutral by the year 2025.

They have also started a movement called the sustainable 2nd century that aims at making each and every aspect within the university campus sustainable. Therefore, all the new structures and buildings on the campus will be energy and water efficient as well as design and construction that will be eco-friendly. 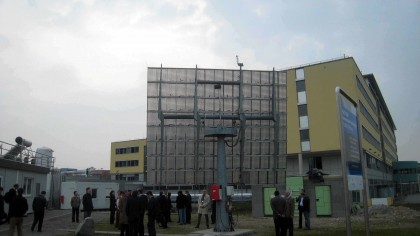 5 Top Renewable Energy Research Centers in Europe and the USA

Also, most of the waste that is generated on the campus is recycled.

It is clear that universities around the globe are working hard to do their part in making the planet a good enough place for the future generations to come. They are not only building the campus a green and eco-friendly space but are also striving hard to educate and make the people more aware and conscious of the environmental impacts and how to combat them.

It can be claimed that if these initiatives continue, the coming years will make for a better place for the generations to come.