PhD candidate David Nadlinger has taken a photo of a glowing atom in an intricate web of laboratory machinery using long exposure.

PhD candidate Nadlinger took a photo of a glowing atom in an intricate web of laboratory machinery using long exposure. The single strontium atom is seen illuminated by a laser while being suspended in the air by two electrodes. The two electrodes on each side of the tiny dot are only two millimeters apart.

The image has won the first prize in a prestigious science photo contest by the UK’s Engineering and Physical Sciences Research Council (EPSRC). The image beat more than 100 entries to the first place.

Nadlinger, a quantum physicist, has explained in the award’s announcement how he made the microscopic visible through conventional photography.

“The idea of being able to see a single atom with the naked eye had struck me as a wonderfully direct and visceral bridge between the minuscule quantum world and our macroscopic reality.”

“The idea of being able to see a single atom with the naked eye had struck me as a wonderfully direct and visceral bridge between the minuscule quantum world and our macroscopic reality,” he said.

Nadlinger used normal equipment that most photographers use instead of extension tubes, which is a lens accessory increasing the focal length of an existing lens and is reserved for very close-up photography.

“When I set off to the lab with camera and tripods one quiet Sunday afternoon, I was rewarded with this particular picture of a small, pale blue dot.” Nadlinger said. “It’s exciting to find a picture that resonates with other people that shows what I spend my days and nights working on,” he added. "The best part.. was the opportunity to excite people about my research, more than winning a competition.”

The EPSRC has explained how a single atom may be visible to a normal camera. 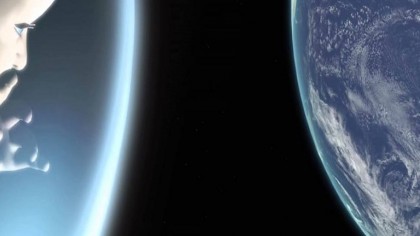 These Images Will Completely Change Your Perspective on Your Existence

The photo’s caption reads: “In the centre of the picture, a small bright dot is visible – a single positively-charged strontium atom. It is held nearly motionless by electric fields emanating from the metal electrodes surrounding it. […] When illuminated by a laser of the right blue-violet colour, the atom absorbs and re-emits light particles sufficiently quickly for an ordinary camera to capture it in a long exposure photograph.

This picture was taken through a window of the ultra-high vacuum chamber that houses the trap. Laser-cooled atomic ions provide a pristine platform for exploring and harnessing the unique properties of quantum physics. They are used to construct extremely accurate clocks or, as in this research, as building blocks for future quantum computers, which could tackle problems that stymie even today’s largest supercomputers.”

Other photos which were found impressive by the judges were an extreme close-up of a butterfly's wing captured by Bernice Akpinar from Imperial College London with an atomic force microscope. The photo won the first place in the “weird and wonderful” category.

There was also the piece from Luke Cramphorn of the University of Bristol Robotics Laboratory. This two-part entry featured a robotic hand and arm taking a selfie with a selfie stick and a mobile phone, along with the selfie photograph itself.