Toshiba showed off a piece of technology that will be used to assess the damage to the Fukushima Nuclear from the 2011 tsunami.

On Friday, March 11, 2011, the area of Fukushima was struck by a massive earthquake followed by a huge tsunami that devastated the area. "The tsunami inundated about 560 sq km and resulted in a human death toll of about 19,000 and much damage to coastal ports and towns, with over a million buildings destroyed or partly collapsed" according to the World Nuclear Association. The loss of life and damage was horrendous. What scared officials the most was the potentially catastrophic event that took place at the island's nuclear reactors. The natural disaster caused the melting of the facilities cores triggering the evacuation of thousands of people.

Now, Toshiba has showcased a telescoping device for probing the devastated reactors at the nuclear site.

The Fukushima disaster Japan was one of the worst in modern history. After a major earthquake, a 15-meter tsunami crashed down on the coast, causing major damage to the surrounding area and the massive nuclear plant.  The natural event caused all three Fukushima Daiichi reactors to shut off, causing a nuclear accident. Between March 11 and March 14, all three cores melted.

Rated a 7 on the INES Scale, the reactors were able to stabilize a bit after two weeks. Fortunately, after the nuclear event, there have been no reported death or cases of sickness from the radiation that leaked out of the reactors. 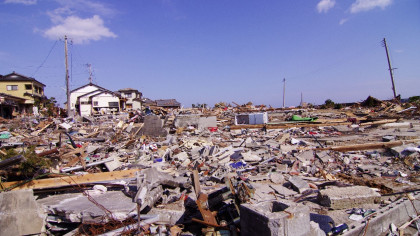 Yet, over 100,000 people from the area were forced to be evacuated from the area. Though many would like to return to their homes, the Japanese government have been hesitant to allow people to return.

The energy division of Toshiba Corp.'s has just showcased a telescopic pipe that holds a pan-tilt camera designed to gather important information from inside the chambers affected by the Fukushima. The 13 meters long device is designed to give the government officials better insight into the full extent of the damage.

With aims of beginning the mission in early January, the probing device will help with the decommissioning of the power plant and longer-term plans of getting people back to their homes in the surrounding area. Compared to a giant fishing rod, the probe is about 12 cm in diameter making it easy for the device to descend all the way to into the reactor, avoiding any debris or obstacles.

As the mission moves forward in early 2018, the aim is to properly continue to deal with any of the environmental issues that could be plaguing the area. Toshiba's new tool is a great step in the right direction.