There are a wide variety of combustion engines out there but most don't divert too far from the conventional setup. The combustion of a fuel in a chamber produces force by expanding the high-temperature, high-pressure gases inside and that force is directly passed on to some component of the engine. The output is typically some form of rotation, be it turbine blades or the pistons and crankshaft of an automobile. 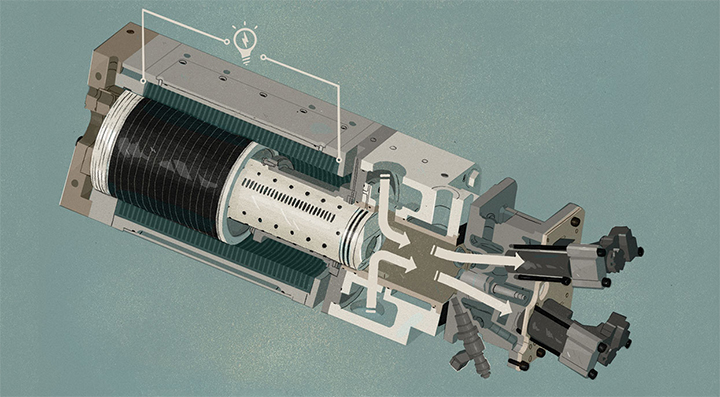 Now, Toyota have come up with an intuitive new setup that has no crankshaft whatsoever and which produces three-phase electricity. They've dubbed it Free Piston Engine Linear Generator (FPEG), the 'free' referring to the lack of a crankshaft attached to the pistons. On the power stroke of the cycle, the force produced in the chamber drives the pistons to push permanent magnets through a coil around the cylinder chamber, which produces electricity through electromagnetic induction.

The engine can be powered sparkless through a diesel cycle or run on standard gasoline. The video shows a two stroke cycle which may spoil its chances of seeing use in automobiles as two stroke engines are known for their increased emissions, but Toyota have claimed that a twin unit design with a 20 kW output should be able to power a light sedan to cruise at 75 mph (120 kph).

You may be wondering how the piston will return to its position seeming there is no rotating crankshaft and the answer is simple, a gas spring placed at the end of the chamber will provide the force to compress the gases once again. A single unit would have some serious vibrational issues and so a twin unit design means that the two pistons can cancel each other out and provide balance. It's also worth noting that there are no complex rotating balances required due to the lack of a crankshaft.

They have even gone ahead and produced a 2 foot long prototype, 8 inches in diameter, that can produce 15 hp. The design is theoretically scalable to something that can produce a larger power output but we're still a long way away from that time, but we are eager to see where Toyota go with this.