Toyota Designs a Robot that Can Make 200,000 Shots on the Basketball Court

AI is making its way to the basketball courts as well.

CUE is a humanoid robot that learned its shooting techniques from Artificial Intelligence (AI). It can shoot basketballs with incredible accuracy: a range of close to 200,000 shots can be made, at a distance up to 3.6 meters from the backboard.

Built by a team of engineers at Toyota, CUE stands 190cm tall. It made its recent debut, going head to head with the local professional Alvark Tokyo team. Although it moves on rolling wheels and the shots are rather repetitive, CUE still managed to completely outperform all the players on the court in the category of shooting, with one player expressing with confusion, “They all entered [the net], I can’t believe it,” with another player adding, “I thought he would miss one, but…I feel frustrated,” according to the Asahi Shumbun, the Tokyo-based newspaper which was present for the setup by the team from Toyota as well as the full exhibition.

Ironically, the biggest miss for the designers of CUE seems to be the look of the robot. Although the frame seems to support the uniform well, and the hands and arms are designed in a way to maximize shooting, wrist flexing for longer distance shooting and dribbling the ball (basketball lovers, of course, will reserve their approval no doubt until video footage emerges of CUE palming a basketball with its hands), the shooter is faceless and has a spiky appearance that gives an overall cyborg-like effect.

Most likely designed for the purposes of the exhibition match, to show the prowess and abilities of the robot, CUE will definitely need to undergo some cosmetic design changes to make it ready for the public, although at one point in the video one of the volunteer players did place his hands next to the android's hand, demonstrating that the size of both hands was more or less the same, which is a good sign of CUE's overall ability, but not necessarily of its level of dexterity. 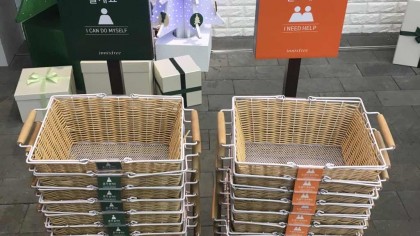 What is the Next Step for CUE?

Although it’s doubtful whether or not this fast-dribbling bot could stand up to a professional basketball player—shooting baskets and executing offensive moves seems to be its strongest asset, the real fan-draws of assists, layups, rebounds, and a whole range of defensive moves the bot is not equipped (at least not at this stage of its development) to execute.

The biggest challenge for the makers of robots like CUE is to create and sustain a consistent place for them in the world of sports. At odds with their plans is one of the most basic tenets of sports: celebrating excellence in human ability. Therefore, the decision that Toyota and other companies like it will need to make is whether creations like a CUE, as impressive as they are, will simply remain part of a project that reflects human ingenuity, or whether it will be designed for a greater purpose. In the case of humanoid robots, the intersection of vision and reality is creating an interesting dilemma. Only time will tell what creative solutions will appear.

A Floating Boat that Can Tackle the High Seas