Toyota's recently filed a patent shows a flying car which has rotor blades emerging from its wheels.

Toyota has filed a patent for a crazy flying car idea with wheels that include spring-loaded pop-out helicopter rotors. It seems like Toyota imagines that future drivers will need the option of both ground and air travel.

For this particular design if you fancy some airborne time, put your vehicle into flying mode, which will make the wheels of the car move upwards on struts. From the wheels will pop out rotor blades which presumably provide enough lift to get up and away.

The patent describes how the wheel and rotor combination would be electrically powered. But the actual source is unknown, perhaps by EV batteries or a hydrogen fuel-cell system.

When the car is in land mode the vehicle can steer in a way similar to a tank or excavator where the vehicle turns by adding speed to one side of the tracked wheels. From what we know about other tracked vehicles like bulldozers etc, this might not be the most agile way to navigate urban traffic.

But then again, this is only a patent and nowhere near even a concept prototype. It is unclear if Toyota even plans on pursuing these kinds of technologies.

Flying cars not a distant reality

Flying cars are becoming closer and closer to a reality. Aston Martin, Terrafugia and Uber are all working on flying car designs as a way to beat heavy city traffic and get people from point to point faster and cleaner.

Uber’s flying car concept has been talked about for a while. The ride-sharing company plans to launch the system called Elevate in three cities in 2020.

Uber is so serious about getting their customers skywards they are working with NASA on a brand-new air traffic control system that will help to manage their low-flying, possibly autonomous aircraft.

Uber teams up with NASA for Elevate project

NASA has reportedly been keen for a long time to develop an uncrewed traffic management (UTM) project and their new relationship with Uber will allow them to trade information and expertise. 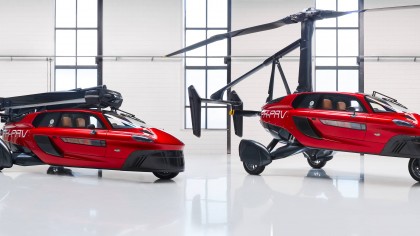 “NASA is very focused on getting UTM adoption and pressure-testing the framework and make sure it works correctly,” Uber’s head of product Jeff Holden said last year. “Uber is actually trying to put this new air traffic system into production.”

Uber has its eyes set on Dallas, Dubai and Los Angeles as the three initial cities where Elevate will launch. City officials have reportedly signed off on the idea in Los Angeles, but negotiation with local residents concerned about noise pollution and access still needs to be ironed out.

Uber has locked in a deal with Sandstone Properties, to develop rooftop launch pads for its vertical takeoff and land aircraft.