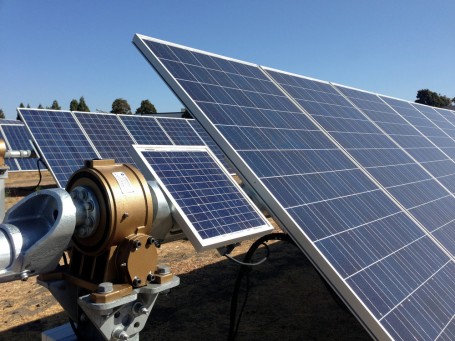 A solar tracker is a device that orientates a PV system, particularly a large installation such as a solar farm, towards the sun in order to enable it to capture more solar energy than it would otherwise do without such a device. In essence, tracking is about minimising the angle of incidence between incoming sunlight and a solar panel array. Solar panels can capture the diffuse part of the sun’s light, in the blue sky which also increases proportionately when it’s cloudy, as well as direct sunlight and solar trackers can increase the amount of solar energy captured. In general, tracking systems can usually capture an additional 50 percent of sunlight in summer and 20 percent in the winter, but this differs according to latitude.

However, they are even more essential for concentrated photovoltaics (CPV) and concentrated solar power (CSP) plants, where they support the optical components of these systems, which are designed to target the direct component of sunlight. This accounts for 90 percent of the sun’s energy, therefore trackers must be orientated appropriately. High accuracy trackers can have accuracies of ± 5 degrees, meaning they can deliver more than 99.6 percent of the energy carried by the sun’s direct beam as well as 100 percent of the diffuse light. However, these trackers tend not to be used by non-concentrating PV systems.

In recent years, their deployment has often been stimulated by the steady digression of government incentives such as premium feed-in tariffs (FiT). Thus as payments for renewable energy have decreased, so project developers have compensated by seeking to maximise output.

There are two basic types of tracker: single-axis and dual axis and these in turn can vary in their form such that there are actually a wide variety of trackers, all of them designed for particular situations and desired levels of performance.

Single-axis trackers follow the sun’s course east to west whereas dual axis can also be inclined in order to account for the difference between the angles of the sun in winter and summer. There has been a considerable amount of debate in the industry as to the effectiveness of dual-axis trackers given their increased complexity and a relatively small difference in annual collection between the two types of tracker. One review of production statistics from Ontario found the difference was only about 4 percent in total, comparing somewhat unfavourably with the improvement delivered by single-axis trackers over a fixed array (24 to 32 percent). However, dual axis trackers can achieve production of 40 to 45 percent above a fixed roof array in situations where there is very little pollution in the atmosphere (‘high clarity’). Unfortunately, most regions in developed countries suffer a Clearness Index level of .5 or worse. 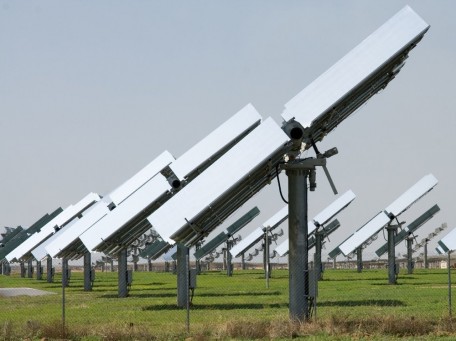 Tip-tilt dual axis trackers (TTDATs) are mounted on poles with the east-west movement rotating around the pole with a T or H-shaped bearing enabling vertical rotation.

Azimuth-altitude dual axis trackers (AADATs) have the azimuth axis vertical to the ground. They use a large ring mounted on the ground with the array mounted on rollers. This means that the weight of the array is distributed over part of the ring rather than on the pole which in turn allows them to support much larger arrays. However, the diameter of the ring determines the spacing and that in turn may reduce the density of the arrays.

A passive tracker uses a compressed gas fluid with a low boiling point to drive it around in order to correct imbalances. These systems also use shader/reflectors responding to early morning sunlight to ‘wake’ the solar panel and tilt it towards the sun.

Finally there is a chronological tracker which turns a solar array in the opposite direction to that of the Earth’s rotation.

Trackers directed around the solar panel via a system of motors and gear trains. These are operated by a controller responding to the direction of the sun’s travel. They also use slewing drives (a slewing drive is a type of gearbox that can hold radial and axial loads) to manage their movement. In a concentrated solar power (CSP) plant, dual-axis trackers are controlled by a central computer, manage moveable mirrors called heliostats which reflect light to the central power station. 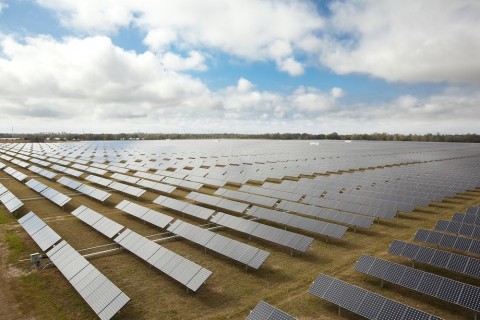 There are also differences in the way in which they are installed. For example, a ‘floating foundation’ doesn’t need concrete foundations as it just sits on the ground, usually on a gravel pan. This means they can be installed at landfill sites or other such locations, thereby increasing the number of sites at which they can be used.

Tracking is mostly suitable for large commercial and industrial solar applications and less suitable for residential rooftop systems. Where tracking systems are installed on residential rooftops, they have to be offset from the roof in order to allow for the movement of the panels. This in turn increased wind load and requires an expensive racking system. There are also aesthetic considerations that may be relevant. Even on large-scale sites, trackers necessitate the use of a larger area than fixed systems because the movement of the panels can create shadows on other panels if they are not appropriately spaced. Nevertheless, the combined benefits of solar tracking, improved solar cell efficiencies and innovative advances such as thin-film have undoubtedly had the effect of moving solar energy closer to grid-parity with fossil fuels, some say within a few years.

The main problem with trackers is that they increase costs. Therefore, if a tracking system adds 25 percent to the project costs while also improving output by 25 percent, it can be argued that the same level of performance can be achieved simply by increasing the size of the system. This also eliminates the additional maintenance required for the tracking system. As costs for solar continue to fall, the cost-effectiveness of installing a tracking system can decrease. Another problem is that tracking system motors have to be continually maintained, which is where more innovative systems coming in maintain a keen advantage. This is widely recognised within the industry. For example, Scott Dailey, tracker project manager at First Solar, speaking to Renewable Energy World in 2013, argued that dual axis trackers are only really deployed in markets with high feed-in tariffs (FiT), because the increased revenue obtained by maximising output tends to offset higher operations & maintenance outgoings.

When they were first introduced on to the market, tracking systems were usually fairly bulky and unreliable. Many of the trackers installed in Europe during the Feed-in Tariff (FiT) boom suffered from major reliability issues, sometimes with repeated incidences of failure. According to M J Shaio, senior analyst at GTM Research, up until a few years ago it was general the case that the only developers wanting to install trackers were those willing to accept a lot more risk.

However, more recently trackers have become far more innovative. For example using GPS to realign themselves automatically. Companies such as NEXTracker incorporate control systems into their trackers which monitor the angle of each row of solar panels in real time and report back on tracking accuracy in order to keep the panels facing directly into the sun all the time. The company’s NX Horizon product is a self-powered tracker (SPT) which has a self-contained motor, enabling it to be deployed on each row of panels which in turn eliminates wiring and trenching as well as saving power.

Unfortunately, another innovative tracking system, QBotix, failed to make it to market. QBotix consisted of 200 trackers with robots, the idea being that each robot would travel to each tracker on a monorail that has charging points for the robots built into it. The monorail also carries the wiring for the whole system thereby eliminating the need for trenching. The robots would adjust the trackers individually every 40 minutes throughout the day and also collect performance and reliability data which they could use to optimise the trackers. This sounds fairly impressive, except that the company fell apart in August last year.

Nevertheless, innovative developments in solar tracking are making it much more attractive, especially in areas of high solar radiation. Maintenance costs are also beginning to fall as the technology improves. More projects are now using trackers and the market is burgeoning. In fact, current predictions point to a tracking market worth $6 billion by 2020. That’s fairly impressive.