Due to growing demand for solar and wind energy -- and therefore reduced demand for gas and coal -- General Electric Co. will be slashing 12,000 jobs in 2018 to try to stabilize their budget.

General Electric Co. has declared that it is going to lay off 12,000 workers in order to prepare for the decreased demand for fossil fuels in 2018.

The last decade has been huge for solar energy. Both private consumers and state organizations have started to see the light: solar energy is reaching a cost-efficiency that will put it far above its carbon emission creating predecessors, coal and oil.

The motivation behind this monumental shift in energy paradigm is due in great part to looming concerns over the environmental effects of burning fossil fuels, and by the recent boom in accessibility and reliability of solar energy. Environmentalists have reached an overwhelming consensus that pollution from the burning of fossil fuels is causing global climate change, and that its catastrophic results will become very clear much sooner than previously anticipated. Fossil fuels have also concerned investors and innovators for decades due to their nature as non-renewable -- sure there is plenty for our current consumption, but the world's population is growing constantly and there is no sense in relying on a commodity that will eventually expire when we have the capability to harness fully renewable resources instead.

In response, scientists and engineers have been working tirelessly to produce cheap, clean, efficient solar and wind energy. In 2017, U.S. states like Florida began to integrate solar energy into their infrastructure at a rapid pace, starting a trend of non-reliance on the old ways. Industry titans like Tesla have been spearheading the movement and have taken advantage of the increased demand in order to confirm investors.

But for historical energy production companies like General Electric, the new wave has been very bad for business. The company released a statement saying that traditional energy solutions have become weaker in the market, giving way to the innovation of the 21st century. GE is downsizing 12,000 workers in 2018, 18% of their power workforce, hoping to save $1 billion in 2018. The statement released by the CEO said that GE is making these cuts in order to provide financial stability so that they can return in 2019.

GE's sales figures for 2016 demonstrate exactly why the company is experiencing pressure due to renewable energy. Renewable energy was less than ten percent of the revenue the company made that year. There is no more room for slow innovators in the market -- GE will either adapt quickly, or it will fade into history with the rest of the coal and oil industry.

But is eliminating so many jobs going to help GE grow and adapt to the future? The changes will eliminate some short-term stress from the shareholders, but by gutting the infrastructure of the company is bound to have a negative impact on stability and research in the long term. Should they be trying to pivot towards innovation instead? 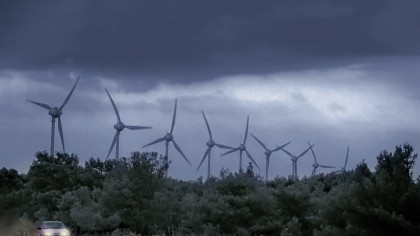 GE produces almost a third of the world's energy. Despite this, their stock value fell by 40% in 2017. Once upon a time, there was no competition with coal and oil -- as long as GE produced the best and most reliable results on those terms, there was little competition for them either. But as solar farms and electric batteries reach monumental efficiency records, what once made the company a safe and reliable investment may now be its worst enemy.

In the last year, GE produced a new super-efficient line of gas turbine generators. Twenty years ago this new generator would have been cutting-edge; today, however, personal solar panels are so efficient that the people who own them generate more than they can use, and are able to sell the excess back to the power company for distribution. The world no longer needs gas turbine generators -- it can now rely on a form of energy generation that you don't have to spend money to fill up.

Of course, updating an industry from inside a company like GE is an enormous task. Development of oil-powered generators does not translate directly to development on solar panels. Much of the staff being laid off wouldn't have a place in the new world of energy creation, anyway. But the fact of the matter is that GE hasn't discussed options or opportunities to grow out of this downsizing; the company has only stated that the cuts will prepare them for the next year. If 2018 holds the same stalwart lack of progress that 2016 and 2017 did, there is little hope that the company will return to its former glory.

Energy is an extremely volatile issue in countries around the world. So much money has gone into power plants and infrastructure, and so many jobs are reliant on their existence, that lobbies have been very successful in protecting them from the market trends in the last decade. The same lobbies that fight for roadwork funds instead of cleaner, safer rails are the ones that fight to keep oil and coal alive. This type of lobbying crushed electric cars in favor of gas-powered ones decades ago, and it still works today to try to keep companies that burn coal and oil on their feet by arguing that events like GE's catastrophic downsizing are extremely bad for the economy. These arguments have been made for economic protections of oil and gas companies in the United States for years.

But the market has finally spoken. 2018 will be the year that settles this debate once and for all: are coal and oil worth keeping around in a world that can harness the sun and the wind to create energy without destroying the environment? Can companies like GE fail to innovate, or will they eventually be forced to pay the price? In their statement, the CEO said that they were dedicated to preserving jobs -- does that mean a continued dedication to oil and gas, or is it their intention to upgrade their infrastructure and get on board with the 21st century?