Up until now there has been no material that can restore the elastic properties of human skin. Today, a group of researchers says they have successfully developed a 'second skin' polymer that is strong, stretchy, safe and adherent. It could potentially be used to heal wounds, decrease the appearance of wrinkles, aid in covering up diseased skin and reduce skin dehydration. The study was first published in the journal Nature Materials.

The transparent 'second skin' is in a gel state and is then applied to the skin. The process involves the application of two different gels, one after the other. The first one is based on siloxanes, and the second one contains a platinum-based catalyst. This cross links the polymer chains together to make the material tougher. After the application process is complete, the polymer layer is only 40–70 micrometers thin. After it dries and bonds with the skin, it is completely invisible and the researchers said it lasts about 16 hours. Robert Langer, professor of biological engineering at MIT and co-author of the study said, "It’s kind of like an invisible Spanx that you could put on skin".

A version of the transparent film has already become available to people through dermatologists since 2014. The initial product is currently licensed to two companies, Olivo Labs, and Living Proof. Film star Jennifer Aniston has already invested in Living Proof, which was co-founded by Langer. It's important to note that this material doesn't get rid of wrinkles in any way. It only masks them and for that reason, the material is more like transparent under-eye panty hose, but less invasive because the people who've applied it say they cannot feel it on their skin.

See the example below to see what this 'second skin' looks like when applied to under-eye bags. The skin on the left side has received the polymer application and the one on the right has not. 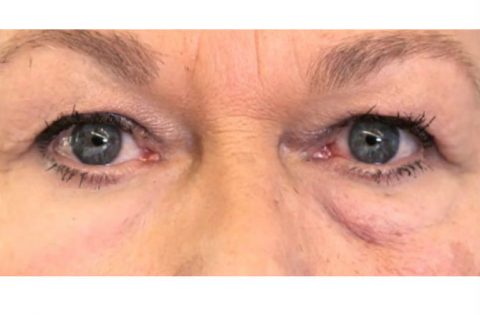 You'll notice in the video when the under-eye area is slightly pinched, the skin doesn't move nearly as much as the untreated eye. Langer states that this material will be used for both medical and cosmetic purposes. Everyone seems to agree that if this material works well and people find it useful, it will be a big seller.

One remaining question I have after doing research on this material: does this material allow sweat glands to continue to do their job or does it prevent a lot of moisture from leaving the skin's surface? The study states that the material is breathable, but that it also prevents the skin from drying out. If you find any clarification on this particular matter, leave your comments below.