Airbus A320 forced to abort landing An Airbus A320 was forced to abort landing at Manchester airport after being hit by a strong crosswind. The failed landing was captured on video, you can watch the video below. A combination of gale forced wind and heavy rain caused the airbus to seesaw and lurch violently seconds before landing.

According to photographer Simon Whittaker who filmed the video "'The weather was dreadful and treacherous at the airport. It was pouring with rain. I would say there were around 10 aircraft which attempted to land but pulled up on approach...It would have been scary for the passengers as it was all over the place in the air." 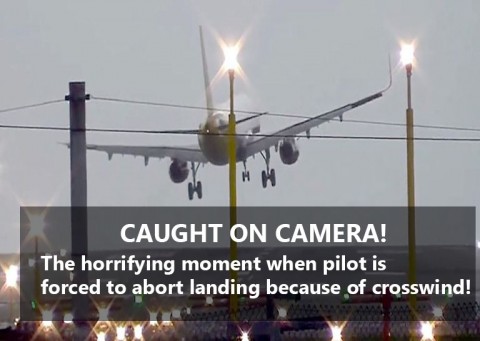 Britain has dealt with some wild weather recently such as Storm Clodagh which battered some places with winds reaching 79mph. According to forecasters more high winds are expected during the rest of December.

Unfortunately the recent wild weather has caused a lot of damage in some areas and there have been some fatalities.