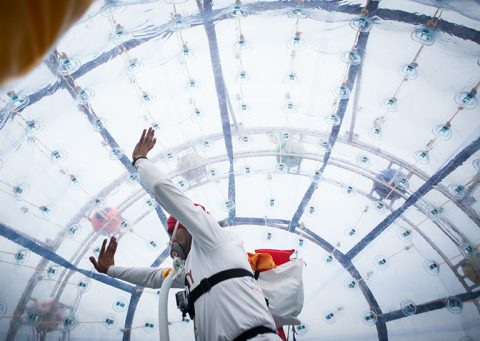 Ultramarathon runner and peace activist Reza Baluchi has been a transportation escape artist for most of his life. When he was young he ran away from Iran by joining a German cycling team. After years spent traveling by bike and foot, Baluchi crossed into the United States by accident. He then was granted political asylum after he promised to run across America to benefit 9/11 victims.

His latest oceanic ultramarathon consists of cycling inside his handmade hydro pod that resembles a hamster wheel and he's been trying to reach Bermuda in it for several years. He's been rescued by the Coast Guard before, when his bubble burst. He says he's trying to raise money for "the world's forgotten children" and his website describes his acts as "a life threatening journey at sea for charity!" He is definitely a man on a mission. He said he refuses to give up on his oceanic mission even though he's failed numerous times. 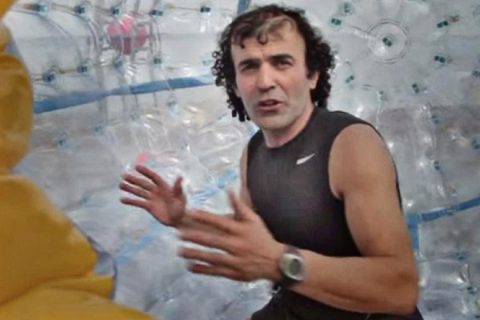 After his latest skirmish with the Coast Guard, Reza has agreed to have a support boat travel with him in case of emergencies. The Carefree Boat Club has recently stepped up to sponsor him. His roundtrip route which is estimated to take 5 months will go from Florida to the Bermuda Triangle then onto Puerto Rico and back. He'll be equipped with a GPS device, satellite phone, video camera and food. He plans to survive on protein bars, tuna, sea water purified through a filter, Gatorade and chewing gum for sea sickness. He also has a hammock set up at night to sleep in.

Reza is no stranger to training in harsh environments. He lived in a tent in the hottest place in America, Death Valley, in order to train for the Badwater Ultramarathon. Watch the crazy video that shows him running in the stifling hot desert while dragging a weighted tire from his waist. This video might make you appreciate your desk job in a new way.

Reza says he he got the idea of making the voyage in the hydro pod when he was training in the desert in Death Valley. He was able to successfully train in daily 120˚F weather and after a while, his body got acclimated to the harsh conditions. The inside of the hydro pod regularly reaches 120 degrees, so his desert training prepared him both physically and mentally for his ocean ultramarathon.

Is Reza Baluchi a hero, survivalist, extreme athlete, crazy man, saint, peace activist or a combination of all? I'll let you decide for yourself. One thing he is not: boring. 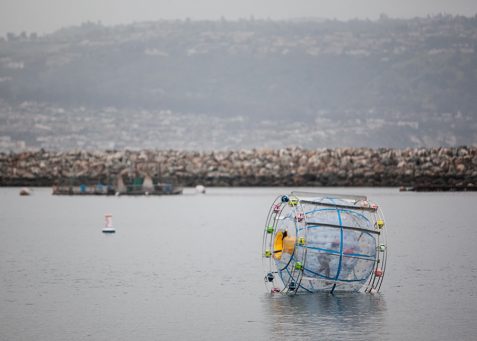