Despite Tesla being in the headlines constantly with the Model S, the anticipated Model X and of course the P85d's 'Insane Mode', the Nissan Leaf is still the best-selling full-electric car and they're now getting some glowing press coverage of their own with this Nissan Leaf glow-in-the-dark edition. The paint gives a normal off-white appearance in the daylight but emits an ambient blue glow during nighttime.

The paint, which is said to be entirely made of organic materials, is Nissan's way of drawing attention to the increasing number of Leaf owners who have installed solar panels at home. The car was designed in partnership with inventor Hamish Scott, who previously created the Starpath glow-in-the-dark spray-on coating for footpaths and roads.

The organic coating has a closely guarded recipe but does use an ingredient called strontium aluminate, a solid, odorless and chemically and biologically inert compound, which allows energy from light to be absorbed during the daytime to provide 10 hours of glow during the dark. It's also said to last up to 25 years.

"If you walked up and touched the car it would feel exactly like a car paint," says Scott. 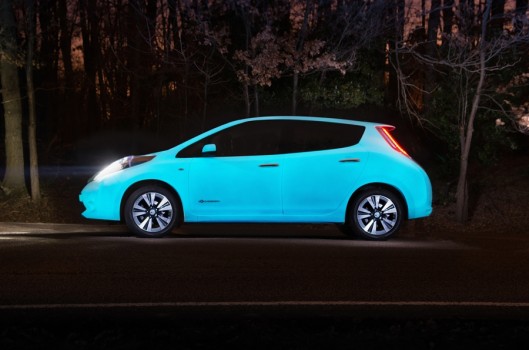 Unfortunately, Nissan have no plans for commercial release of the concept so you won't be able to get your hands on one - which is a shame because I quite like the idea of a street filled with Tron-esque cars at night. And imagine them whizzing around on Tron-esque roads too.

Although used in this example to bring attention to the solar conversion of Leaf customers, Scott is more interested in the potential safety uses of the techy paint such as improving visibility of bikes or boats. "This is no gimmick," says Scott. "This is a serious technology that is going to be used in an awful lot of places."

Custom glow-in-the-dark paint jobs are nothing new, Nissan says it is the first car manufacturer to directly apply such technology. Check it out in the video below: