Fritz von Opel, founder of the Opel company, started development of series of rocket powered road and railway cars and planes, and in some cases driven or piloted by mr. von Opel. 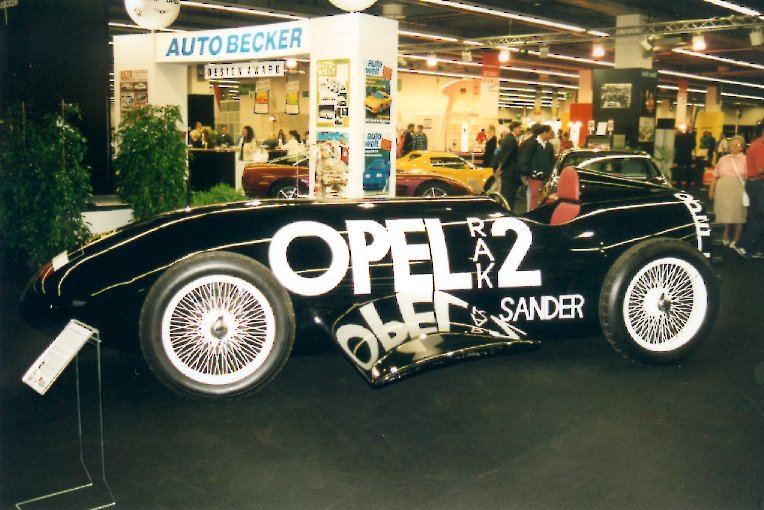 Later in the same year Opel created the world's first rocket plane on June 11, 1928. It was based on a sailplane named the Ente (German for "duck") with attached rocket motors to it. The base was purchased from  Alexander Lippisch. The aircraft exploded on its second test-flight, so a new plane was commissioned from Julius Hatry, and Fritz von Opel flew it at Frankfurt-am-Main on September 30, 1929. This plane is known under few names: Opel RAK-1, alternatively as the Opel-Hatry RAK-1 or Opel-Sander RAK-1. RAK-3 was the name in some other references in order to distinguish it from RAK-1 and RAK-2 rocket cars. All three names, Opel, Sander, and Hatry were painted on the aircraft, as was the RAK-1 designation.

The RAK-1(RAK-3) had a sailplane wing, under which a pod was suspended to house the pilot and 16 Sander black powder rockets. The tail plane was mounted on booms behind the wing and up out of the way of the rocket exhaust. Opel successfully piloted the RAK-1 over 1.5 km (1 mile) in 75 seconds of flight, but landed hard, damaging the aircraft beyond repair.

Opel planned to build a second rocket plane, but suddenty lost interest before the project was completed. In the meantime, another project claimed the official RAK-3 name, an unmanned railway car powered by 30 solid-fuel rockets, which developed a top speed of 254 km/h (157 mph).