The purpose of a bridge is to create connection between two shores across a river or other basin. Usually bridges do that by supporting railroads, automobile roads or pedestrian walkways. But there is a special kind of bridges called “transporter bridges”. What is so special about them? Instead of supporting railway or roadway, the transporter bridge carries a platform or a gondola across the river.
Every transporter bridge comprises of a tower on each coast (two towers in total) that support a framework of steel girders. The framework is passing higher above the river and is responsible for transportation of the cargo platform from coast to coast. The platform is suspended from trolley by steel ropes, the trolley is moving along the framework and this is how these bridges operate. This bridge type is rarity with no more than 30 built in the whole world. Eight of them are still functional at present. 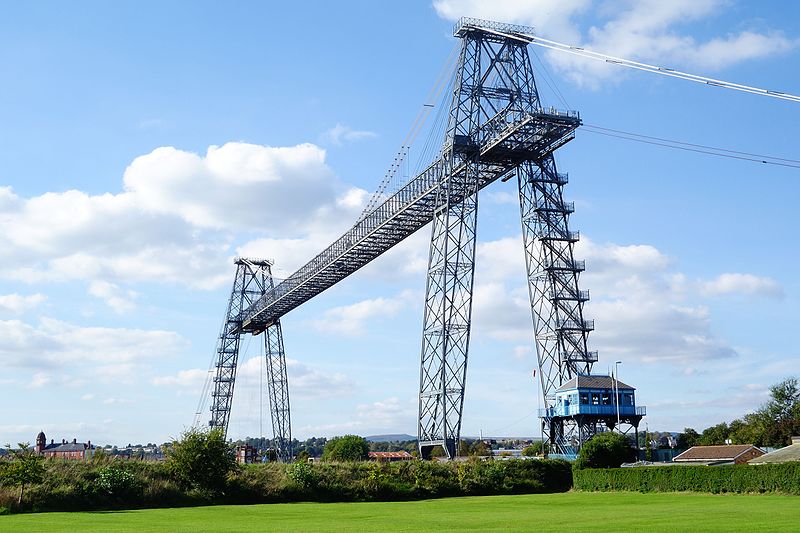 Such bridges were built on places where building of regular bridges with adjustable height would become too expensive. The transporter bridge allows for smooth passing of ships and provides connection between coasts. However, there is significant limitation of the cargo size which in turn limited the popularity of this construction, especially after the growth of the automotive industry. The idea was proposed by the manager of Hartlepool Iron Works – Charles Smith. This happened in 1872 when he proposed to create such bridge above the River Tees to the Middlesbrough Corporation, calling it “bridge ferry”. The “bridge ferry” idea was denied and had to wait for more than 20 years.
Vizcaya Bridge wears the title of the first transporter bridge ever built. The facility was designed by Alberto Palacio and was completely built in 1893. It is incredible that the 120-year-old construction is still in use.

This type of bridges became comparatively popular in France. The first of five completely built transporter bridges was the Rouen Bridge, built in 1898 above Seine. Unfortunately, the bridge was destroyed by the French army in an attempt to slow the invasion of German army during World War II. There were several other transporter bridges in France that were not completed.

The first American transporter bridge was built in 1905 – Aerial Bridge, located in Duluth, Minnesota. After 25 years of existing as transporter, the facility was reconfigured to adjust the height of the central part in 1930. The other such bridge – Sky Ride, participated in the 1933-34 Chicago World’s Fair and was operational for only two years.

Germany has also built two transporter bridges. The first one was built in Osten in 1909. The more interesting German bridge was built in 1913 at Rendsburg and utilizes functions of two bridges. On the higher level is located a platform that supports railroad, and one level below has a framework supporting a trolley that transports cargo across the river.

Did Engineers Just Save New Orleans From Hurricane Ida?