A truck driver has caused damage to Peru's 2,000-Year-Old Nazca Lines after driving off road to avoid a toll.

A truck driver allegedly ‘unfamiliar with the area’ has ignored signs and driven over the Unesco Heritage protected Nasca lines in Peru. The 40-year old truck driver left the clearly marked road in order to avoid paying a toll and drove his heavy truck through the ancient site causing irrevocable damage. The Prosecutor’s Office is taking advice from Peru’s Ministry of Culture, to determine the extent of the damage. The truck's driving looks to have left “deep scars” on at least three of the ancient geoglyphs. In tota, an area of more than 50 by 100 meters was damaged.

The Nazca Lines are an supremely important part of Peru’s history. The mysterious geometric lines are thought to have been made on the surface of the soil between 500 BCE and 500 CE. The lines form many anamorphic shapes like a hummingbird, monkey, and a spider. Researchers believe the lines were made by scraping away the red top soil to reveal the white soil underneath. They have been preserved for so long despite their apparent fragility due to the the area's dry, windless and stable climate of the valley. They are in about 400 kilometers (250 miles) south of Lima.

The designs have puzzled scientists and scholars for years as the huge drawings are only visible from above, which questions how these intricate and neat images could have been created purely from the ground. The Lines were determined a Unesco World Heritage site in 1994, and have been described by Unesco has “among archaeology's greatest enigmas.”

The investigation into the truck driver's damage is still continuing, but at an initial court hearing the judge said they could not determine that the truck driver was acting with intent. The ministry has stated they are seeking nine months of preventive detention and $1,550 fine.

This isn't the first time the Nazca lines have been damaged. In 2014 Greenpeace protesters damaged the site while they were laying down a banner on the site to to get the attention of world leaders who were attending a climate change conference in Lima. Unfortunately for the well-minded group the action caused more damage than good. The group of protesters walked all over the sacred area casing damage to the surround of the lines as they laid down their enormous banner. The campaigners were quick to defend themselves saying they did not damage the lines themselves, but the mere act of walking close by is enough to disturb the sensitive area. Greenpeace later issued an apology.

There are more than 1000 UNESCO World Heritage sites around the world in both the natural and cultural classes. To be eligible for the UNESCO World Heritage stamp the site must be an already classified landmark and have deep cultural, geographical or historical significance. The sites are highly protected from development and inference but a recent report shows the strength of this protection is faltering. 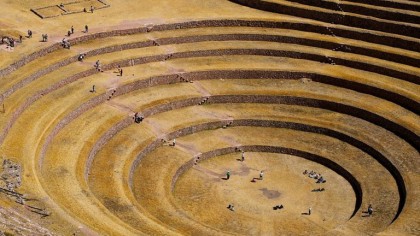 The Mysterious Agricultural Terraces Of The Incas

A report published in Biological Conversation in 2017 stated that many UNESCO Sites are under threat and more than half across the world have experienced some sort of recent deterioration. Syria's recent civil war has caused damage to all six of it's UNESCO Sites including the total destruction of the famous Umayyad Mosque Complex. In Australia, the UNESCO World Heritage-listed Great Barrier Reef was damaged by severe coral bleaching last year, the worst event in the site's history.