True and False Myths About Flights

A number of myths have grown up around airplanes and flying, and most, but not all of them, are false.

Whenever we get on an airplane, we essentially have to suspend our disbelief, disbelief that something that weighs on average 80,000 kg (175,000 lbs), like a Boeing 737-800, can climb into the air.

RELATED: BRITAIN AND US BAN ELECTRONIC DEVICES ON FLIGHTS FROM SEVERAL COUNTRIES

For that neat trick, we have to thank the Swiss mathematician Daniel Bernoulli (1700 – 1782) whose Bernoulli's Principle states that the pressure in a fluid decreases as its velocity increases. Air behaves much like a fluid, and airplane wings are designed so that the air above the wing flows faster than the air below the wing. This results in lower pressure above the wing, and higher pressure below the wing, which in turn leads to lift.

Studies have shown that 6.5  percent of us have a "fear of flying", which is also called "flying anxiety", "flying phobia", "flight phobia" or "aviophobia". The condition is usually treated with anti-anxiety medication and cognitive behavioral therapy (CBT).

Besides our basic disbelief that these "metal monsters" can fly, people have all kinds of other fears about flying. Let's examine a few.

Since airplane doors open inward, this difference in pressure sticks the door securely against the aircraft frame, and it would take a force far greater than human strength to open it. It's only when a plane lands, and the air pressure on the inside and outside of the aircraft are virtually the same that a door can be opened. Remember that before the cabin crew can open the doors, they have to disarm the automatic emergency slides that are incorporated in each door.

Myth: The oxygen masks don't actually provide oxygen.
Fact: At cruising altitude, if an airplane's cabin were to lose pressure, passengers would lose consciousness in about 45 seconds, and death would occur within minutes. If a loss of pressure is detected, the oxygen masks automatically drop, and they provide about 12 minutes of oxygen. This is long enough for the pilot to descend to a breathable altitude.

Myth: If you use your cellphone or electronic device during takeoff and landing, you can bring down the airplane.
Fact: While airlines insist that you turn off your cellphones and portable electronic devices, or place them in airplane mode during takeoffs and landings, the devices do not actually interfere with the plane’s navigation system. The two operate on completely different frequencies. Rather, the airlines want you to be paying attention during takeoffs and landings, and they want you to listen to the safety speech given by the flight attendants.

It wasn't the airlines that banned cellphone use onboard airplanes, it was the U.S. Federal Communications Commission (FCC). 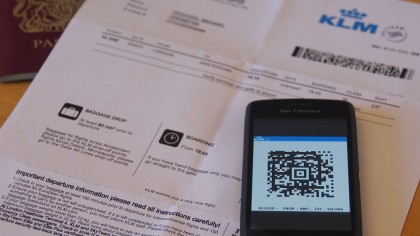 Why You Should Never Post a Boarding Pass Picture Online

Myth: Planes dump toilet waste as they fly.
Fact: When you flush, the waste that is sucked out of the airplane toilet bowl goes into a sealed storage container at the back of the airplane. Once the plane lands, that waste gets siphoned out, and it goes into a ground sewage system.

Myth: Airplane cabin air makes you sick.
Fact: The air in an aircraft cabin is recycled once every three minutes, with 60 percent of it going through True High-Efficiency Particle Filters (True HEPA) or High-Efficiency Particle Filters (HEPA). The other 40 percent of recycled air goes to cooling the plane's computers and its cargo hold. This purifying means that an airplane's cabin air isn't as bad as the air on a bus or train.

Myth: Planes can fly with only a single pilot.
Fact: There is never just one pilot, rather there is always a captain and a first officer (or a pilot and a co-pilot). While the pilot usually has more seniority, it depends on the pairing. The co-pilot in one pairing might be the pilot in another pairing, and vice versa.

Myth: Lightening can bring down an airplane.
Fact: Planes are struck by lightening all the time, usually with no lasting ill effects. While lightening can damage aircraft systems, usually it's not enough to impair a flight's safety. Airplanes are fitted with "lightning wicks" on their wings and tail that dissipate the electricity of a lightning strike.

Myth: An airplane window can shatter and you can be sucked out of the airplane.
Fact: While this occurrence is extremely rare, it has happened. On April 17, 2018, Southwest Airlines Flight 1380 out of New York was bound for Dallas when shrapnel from a blown jet engine pierced the window next to a Wells Fargo Bank executive, and she was partially sucked out of the aircraft. No one else on the flight was injured, and her death was the first ever in Southwest Airlines' history.

Just a month later, a Sichuan Airlines co-pilot was partially sucked out when the windshield of his aircraft shattered. Luckily, he escaped with just scratches and a sprained wrist.

Myth: There are crew sleeping spaces onboard aircraft.
Fact: Many Boeing 777 and 787 planes have a secret staircase that leads to a windowless group of bedrooms that are known as Crew Rest Compartments (CRCs). They are designed to let the cabin crew rest or sleep during long haul flights.

The size and location of these spaces varies depending on the aircraft model, but they are typically hidden  behind the cockpit area, located above first class. On Boeing 777s, there are six to ten beds, and in a separate area for pilots, there are two beds, two seats, and even a bathroom.

"Take the wings off this and you could use it as a tank." -- Joe Patroni, "Airport"

If you still need something to calm your nerves while flying, just think about Joe Patroni in the 1970 movie "Airport".