Turbine-Powered Longboard is as Crazy as you Expected

The Hacksmith recently created an electric turbine-powered longboard that is exactly as dangerous and crazy as you would expect.

While the world patiently awaits the ultimate youtube collaboration between the two craziest, most insanity-filled DIY engineers, the Hacksmith- one of the collaborating YouTubers- decided to create a turbine-powered longboard. The experiment, however, was not  solely intended to be used as the world's most dangerous longboard attachment. As the engineer points out, it serves also as a trial run to test out the viability of using an electric turbine  as a control mechanism for an Ironman suit currently in development.

While it seems incredibly dangerous, the Hacksmith is not phased and continues to pursue his dream in creating a suit with the same functionalities as the suit utilized in the movie, Ironman. Progress, however, has remained at a slow crawl as he works out the massive hurdles to conquer before the suit can take flight. While he has made some progress in creating pneumatically powered exoskeleton arms capable of lifting hundreds of kilograms, he has encountered great difficulty while trying to sustain flight for more than a couple seconds. The methods previously used included the electric turbines, however, without nearly enough thrust, the design was heavily flawed. Next, taking a giant leap of faith, the Hacksmith decided to strap rockets to his arms- arguably the most dangerous (and ridiculous) feat he has ever attempted. Nonetheless, it enabled him to 'super jump', albeit a small achievement, it was a step (or a rocket-induced leap) in the right direction.

Now, the Hacksmith is attempting to accomplish other challenges in the meanwhile while he figures out a viable mechanism to perform a sustained flight. With his latest invention, the turbine-powered longboard, he was able to successfully test a potential control system for his suit. The apparatus consisted of a two electric ducted fans (EDF) strapped to a belt, and of course, a longboard. The turbines were secured using 3D printed parts.

The turbines produce a maximum thrust of up to 5.8kg each, producing 5800w of power through a 4035 Brushless Outrunner 700kv motor powered by lithium polymer batteries. On a bicycle, the Hacksmith was able to reach speeds of up to 55 km/h (about 35 mph). While the experiment marks a great proof of concept, the team is a long way from creating a functional suit. With a collaboration with Collin Furze, however, perhaps the two absolutely mad engineers can cook up a concoction of metal, jets, duct tape, and thermite to whip up the most incredible suit the world has ever seen. However, as of now, the world must patiently wait. 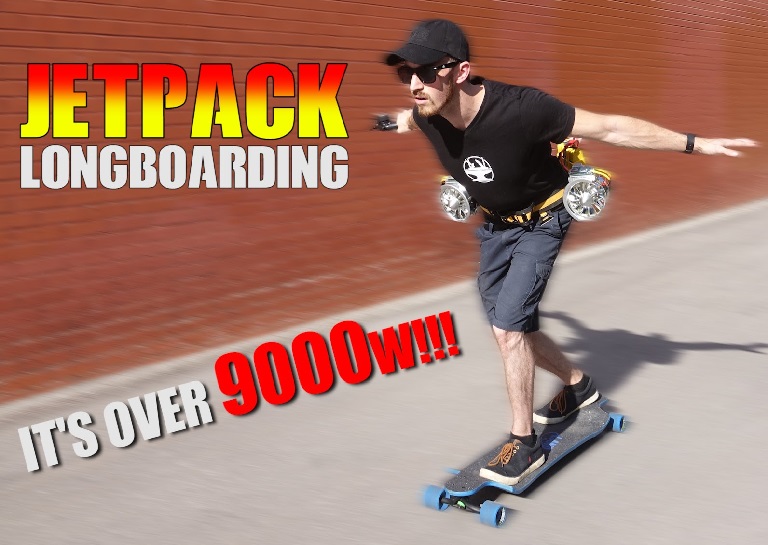