Turkey Opens $11.7 Billion Airport to Become One of World's Biggest

The new Istanbul airport will be able to handle 90 million passengers each year, but could see as many as 200 million travelers with planned expansions.

Turkey's latest travel addition made international headlines. Officials announced that the new Istanbul Airport would become the busiest in the world by 2021.

Project planners for the airport estimated it could handle 90 million passengers in the next two years. Planned expansions, however, could bring the total as high as 200 million people. That's double what the previous record holder -- the Atlanta airport in the US -- lists as its capacity.

The Turkish airport officially opened earlier this week, but due to delays won't be fully operational until January 2019. It cost just over $11.7 billion to build.

President Recep Tayyip Erdogan opened the airport on Monday as part of national Republic Day celebrations. Turkey celebrated its 95th year as a country, and officials felt the opening was symbolic and promising.

Everyone ready for #İstanbulNewAirport’s grand opening, we are waiting start of the ceremony with excitement! ? ? pic.twitter.com/zUJN593Rp3

“With the operation of Istanbul Airport, European airspace will have to be restructured,” he said.

Erdogan also told media that he expected it to be used for a lot of intercontinental flights. He explained he wanted the airport to become a global transit center between Asia, Africa and Europe.

Travelers still wanting to use the Ataturk Airport in the near future don't need to worry. There are no plans to shut down the airport anytime soon. However, there are plans in place to transfer its international code -- IST -- as the Istanbul Airport begins growing in its capacity.

The construction of this airport wasn't without its concerns or controversy. During the build, 30 crew and developers died.

Just how big is the new Turkish airport? 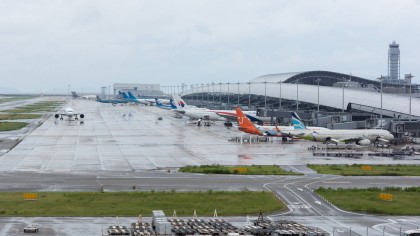 The Turkish airport, however, has planned phases for expansion. As previously mentioned, the government expects the airport to meet 90 million passengers by 2021. With upgrades, officials think that number will grow to 150 million by 2023. It's expected to hit 200 million passenger capacity by 2028 if not sooner.

During the expansion, Ataturk airport will officially be closed to passenger traffic and exist as a private airfield, the BBC noted.