Turkish archaeologists have discovered a new intact tomb that may contain the bones of Saint Nicholas. The Christian saint is credited with inspiring the story of Santa Claus.

While some people may not even believe he exists, others think that he will live forever. But Turkish archaeologists claim they have found the final resting place of Santa Claus.

Archeologists believe they have discovered the grave of Saint Nicholas, the historical Christian figure reportedly the inspiration for the Santa Claus myth. St. Nicholas has long believed to have been born in the Demre district in Antalya, Turkey and new research at a church there has uncovered a tomb that may house St. Nicholas' grave.

Prior to this new information, it was thought that Saint Nicholas was buried in his namesake church in Antalya before it was seriously damaged in an earthquake. The saint's bones were then thought to have been stolen by Italian merchants who took advantage of the damage done to the sarcophagus in 1087.

The ill-fated bones were taken to the Basilica of Saint Nicholas in Bari, Italy. Here they have remained ever since. The bones continue to have a special significance to the church. Each year on December 6th, members of the clergy collect a liquid seeping from the tomb. This captured liquid is believed to host special powers. The exact contents or origin of the liquid is unknown but the tomb is below sea level so this may have something to do with it. The new information from the Turkish archaeologists really put a spanner in the works of this long-held belief and tradition.

The new information about Saint Nicholas’s location came after digital surveys of the church in Turkey revealed the possibility of more intact tombs. Cemil Karabayram, the head of Antalya’s Monument Authority, suggests that the Italian merchants picked up the wrong bones in their hurry meaning it is likely St. Nicholas is still buried in his original location. He goes on to say, “We believe this shrine has not been damaged at all, but it is quite difficult to get to it as there are mosaics on the floor.” 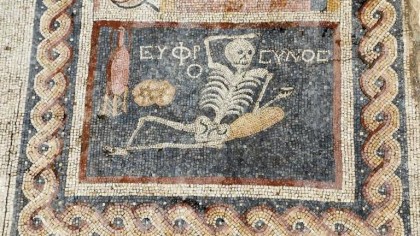 If the research does prove to be true, the impact isn’t just on history. There is a massive tourist industry associated with visiting the final resting places of historical figures, particularly those associated with religious stories and myths. His namesake church in Bari experiences thousands of visitors each year who come to have a glimpse at the tomb of the man whose name has become associated with one of the most widely celebrated holidays in the world.

The transformation of Saint Nicholas to Santa Claus is thought to have occurred when local people started to celebrate his life and miracles, the priest was known for his generous gift giving to young people and the rest is history. If it can be confirmed that in fact Saint Nicholas is actually buried in Turkey, the area is set to experience a massive boom in tourism. The place of Saint Nicholas' birth already experiences many tourists coming to pay their respects to his birthplace and the church. “We are so happy with Saint Nicholas,” Baris Yuksel, a shopkeeper in Demre told news media,  “after lots of centuries, we are earning money thanks to Saint Nicholas.”